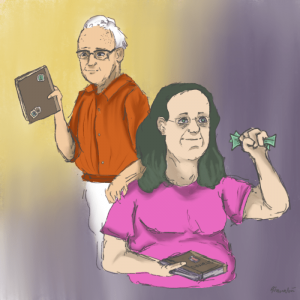 An artist's beautiful abstraction of Bob lovingly collecting and caring for these stamps and then Chris selling them to buy Lego. 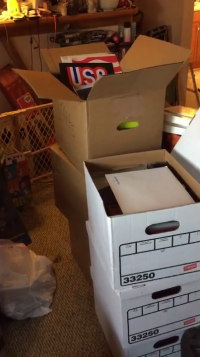 Stamp collecting was a hobby enjoyed by both Bob and Chris. In March 2017, Chris began selling stamps inherited from his late father on eBay, claiming several times to need to pay bills, but spending some of his profit on toys instead. He followed up by offering his own stamp album for $1,000. He also hatched a new business scheme, consisting of a raffle in which participants could enter by purchasing stamps for a chance to win a Son-Chu figure and/or merchandise of Chris's Skylanders avatar, which failed and lead to a massive loss of several hundred dollars.

Bob had given permission to Chris to recycle his inherited collections back into the world for others to use.[1]

Bob started his collection in the mid-1930s, when he was around eight years old. It began with a stamp from Romania, and the collection continued to reflect his interest in foreign countries and the United Nations. By the time of his death in 2011, he had amassed six boxes worth of stamp books[3]. The Romanian stamp, which he had kept through the decades, was still in his possession.[4]

Chris began his collection in 1992, at the age of ten. Bob had introduced him to the hobby, as he wanted to share his interests, and purchased a beginner's stamp album for him. Chris had filled in dozens of spaces in the book, indicating that he liked the hobby. Before the Financhu Crisis, Chris had been collecting stamps as late as 2014.[5]

In 2017, Chris began offering stamp covers from Bob's set and his own stamp album on eBay, ostensibly to pay bills. However, this was quickly proven to be a lie, as he had actually used the money to buy toys, as soon as one day after the first batch of Bob's stamp covers were listed.

He set prices for Bob's pieces at wildly fluctuating levels, some starting at $2, with others as high as $30. In a display of his ego, he then tried to sell his personal stamp album for $1,000, despite the fact that Bob's stamps were decades old and more valuable whereas Chris's consisted of more recent releases. 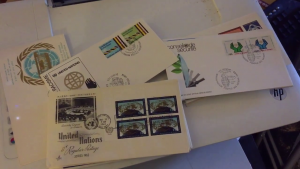 On 1 March 2017, Chris began selling pieces of Bob's stamp collection. In a video advertising the sales, he mentioned having six boxes of stamp books. Initial responses were good; in the first day, he made $63 in sales from eight listings. However, sales quickly stagnated, bouncing back only after subsequent mentions on Facebook. On 19 March, following ten days of no sales, he begged for more, and white knights swiftly responded by purchasing $41.50 across seven stamp covers. This was followed by another lull, and sales shot up again on 27 March after Chris announced a raffle ($35 in a day). However, on two subsequent mentions (the Son-Chu Review video and more pleas for sales following a tantrum over his refusal to get a job), he received $0 for his efforts.

An example of one listing's description is below:

The following is a list of stamps Chris put up for sale, along with notes on pricing and when they were sold. All listings offer free shipping (meaning a piece of his revenue goes to cover shipping, about 50) cents per sale).

Two days after offering pieces of Bob's stamp collection for sale, generally for $5 per piece, Chris listed his personal stamp album for a whopping $1,000. Unsurprisingly, it failed to sell and the listing expired from eBay the next month. Chris then relisted it, still asking for the full $1,000 price, eventually cutting the price 50%. It again failed to sell, and he relisted it again in May; a day later, he slashed the price to $250.

A troll asked a stamp collector friend to contact Chris and attempt to inform him that his asking price was too high. Chris responded[10]:

On 13 March, Chris tried to sweeten the deal by offering some of Bob's stamps as a bonus.

On 7 April, he again added to the bonuses:

He removed the Skylanders bonuses after the raffle concluded.

One of the buyers, who bought a stamp cover for #2.50, reported that it had been crumpled up and stained, with a smudge of possible bodily fluid on the mailed envelope. He posted to Kiwi Farms:

Some people left feedback on his eBay profile, mostly positive, although a few had complaints.

Cost of entry was described as buying one of the stamp covers or the album, with a limit of one entry per person. The prizes are as follows: