This page lists the video requests that Chris was paid to do in September 2016.

Despite having an enormously absurd amount of free time, Chris was apparently inclined to fulfill this paid request at an inconvenient moment.

Hello, Alex! This is Christine Chandler coming live to 'ya from home. Pretty much an inconvenient moment... anyway, wish you a happy birthday! I hope you had a good one today anyway.

...late in the day then, the day after. Anyway, happy birthday to you, true and honest love fan. Zap to the extreme. Take care, stay safe.

Paid Message to the Trolls

Chris answers a paid-request addressed to Kiwi Farms. Chris was inclined to censor the message, albeit allowing the term "vag"—probably because it feeds into his delusion of self-femininity. Throughout reading the message, Chris trails off into elongated, high-pitched muddles—especially when uttering "Criteen". Chris appears unmoved by the contents of this request. Since it's unlikely he recognized the satirical nature of it, Chris probably saw the message as championing him and disparaging the trolls. Yet he responds emotionlessly, "Personal opinion? Eh, whatever."

Chris's TV appears to be on, flickering during the duration of this video.

Unrelated to the request, Chris picks up his toys and performs a skit mocking 2016 presidential candidate, Donald Trump. Representing Trump as an orange block of legos, Chris uses a blue-hair effigy of himself to kick the block. He pauses for a few moments before mildly exclaiming "Goal!" It's more likely than not, Chris is spoon-fed political views from CollegeHumor[1] and Lizzy the Lezzy[2].

Hello this is Christine Chandler coming to you live from home with a, paid message, to the internet trolls. But specifically, the KiwiFarms. Alright, quote, and I'm censoring the language:

"Hey there everybody. It's your old pal, your old friend, Lord Armstrong! And I'm here to tell all of you [high-pitched beep], at KiwiFarms, how much I hate all of yous.

First off, what I want (high pitched mocking voice starts) you to do, is leave Christine alone. I love Criteen and [mumbles]. I would do anything for Criteen, anything. I'm the only one fit to see her vaaag. The only one who gets to see Criteen Ch-chandler... Criteen Weston Chandler's vag.

Ook, God, Fuh-you no, fuh-you Hellblazer, fuh-you Flowers for So-Ni-Chuuu, fuh-you Trickie and (high pitched mocking voice ends) Blank for your rip off...comics, that sully Christine's True and Honest work, and most of all, fuh-you LoveYouLongTime for spreading Christine's personal emails about... A-about the lady he was with a few years ago, or she was with years ago. She was the first person of true and honest, to Criteen and loved her forsh-for who she was. Go to heck all of you, sincerely yours, your buddy, your pal, Lord Armstrong."

That's what he said. [sigh] Personal opinion? Eh, whatever. And now for a special bonus. Here is what I say to, orange face. Orange face Donald Trump, and his anti-feministic ways. Trump, you can take a dump! Goal! Thank you, have a good day. 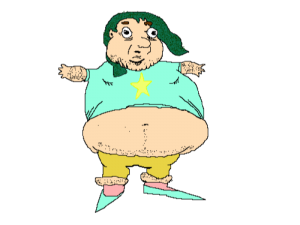 In reference to himself and a toy, Chris titled the video as "We" instead of "I".

Chris's fandom of Steven Universe and his subsequent eagerness to fulfill this request should come as a surprise to no one, as Steven Universe is a cartoon known for its LGBT themes and host of LGBT characters.

Chris goes on a rant describing how he relates to Pearl, his favorite character from the show. Chris identifies with her ability to learn from her mistakes, her vast knowledge, her understanding of her limitations, and her articulate way of speaking. In a more bizarre turn, Chris confesses to coveting the outfit of this cartoon character—who by far has the slenderest figure out of the main characters of the show. How Chris could even imagine himself fitting into such a dress is ludicrous. This harkens back to how he represented himself in the comics; as slim and athletic. It's apparent then that Chris is still in denial over his obesity.

Hello! This is Christine Chandler coming to ya live from home, and by special request I'm gonna explain why I like Pearl from Steven Universe amongst the gems. I feel like, uh, she's quite a relatable character she is, she ha- she learns some her mistakes, (sic) I think she knows everything, but then she realizes she's not perfect, she doesn't know everything, and... nobody's supposed to know everything... And...plus she's a good motivational speaker and teacher, and...she still (unintelligible) and she still (unintelligible) with, uh, (unintelligible) you know, Steven's mom... So you could tell she picked up some of the greatness, um, uh, shoot.

[Chris is deep in thought] I'm trying to think of Steven's mother's name. [pause] Uh, Rose... Yeah, Rose Quartz, that's it. Anyway, yeah. So anyway, uh... Blue is my favorite color and.... and I like Pearl's outfit. I say, it's like, uh, like a little dressy outfit I could wear. [Points to the Christine Equestria Girls figure] She could wear. We could wear. [Dog whines in the background]

Hm. Anyway, I like Pearl. Guards of [unintelligible]! Yenno, being part Ruby and Sapphire, that's a nice lovely little lesbian relationship right there. Yep. I mean, Amethyst, that's my birth stone. [Chris flashes class ring] I'd say that's- But she's likeable too. Anyway, yeah, I like the gems but- mostly can feel related- I can feel related to Pearl. Um, yeah. I binge-watched only like, uh, Season One and some of Season Two through Hulu. And.... -stress sigh- Mildly sleepy. Oh well. Anyway.... anyway, first new pay for this video request (sic), that I like Pearl too. So there. Mkay. Thank you, and have a good day. [Turns camera off.]

After fulfilling his last video request, We Like Pearl, Chris quickly followed with an upload on his own initiative. Oh, Wait. I've Got one more... is a short sketch of what Chris perceives to be political satire. In this video, Chris uses the Christine Doll to admonish a Galvatron toy he uses in effigy of Donald Trump.

Oh! I got one more that I forgot, inspired by Red Skelton. [pauses, setting up toys] [strange, higher voice] You're a mean king, you wanna be a [save/sage/same]. You put down women. You wanna put money towards damn [pause] businesses and what-not. You're so mean, you're so ugly, you're so vain. [deeper voice] You're a mean king. [Southernish voice] At this- at this time we are not mourning for you definitely and if you ever run for a king or a president again we're not gonna vote for ya either. [Chris knocks the Christine doll against Galvatron, puts down Galvatron and plays with the Christine doll for several seconds] Thank you. [turns camera off]

Chris's overdue greeting to a Faris and a Pepper.

Hello Faris and Pepper! I'm sorry for the delay on the greeting y'all and missing that [unintelligible] the original video, but here it is: [Chris waves] Hey Faris! Hi Pepper! Have a good day.