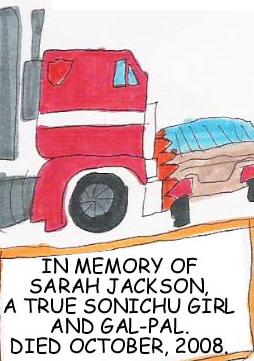 Optimus Prime was depicted as the tractor trailer which savagely murdered Sarah Jackson in Sonichu #8. This has led to speculation that Jackson was, in fact, a Decepticon agent, although Prime's actions, regardless of their intent, still make him one of the deadliest and most popular Sonichu villains of all-time.

In spite of this act, Chris remains a fan of Optimus Prime and considers himself just as strong and noble. Chris has referenced[2][3] a story of a boy who locked himself in his room upon seeing Prime's death in the 1986 film "Transformers: The Movie".[4] Further, Chris considers Optimus Prime an important symbol of masculinity. When forced to say that he was gay, Chris held his Optimus Prime toy throughout the video, an act he later explained was a nonverbal clue that his gay confession was insincere.

In his Rollin' and Trollin' video, it was revealed that Chris carries Optimus Prime around in his backpack, probably for security. According to field trolls, after making fun of Optimus Chris whispered "I'm sorry Optimus" while placing him back in his bag. Sadly, this incident was not caught on camera, but it does prove Optimus has a stronger hold on Chris than previously thought. The only reason he likely doesn't show up as often in the comic as Chris's other obsessions is likely because, as a mechanical object, he's a bit harder to draw than the amorphous blobs that make up the rest of the cast.