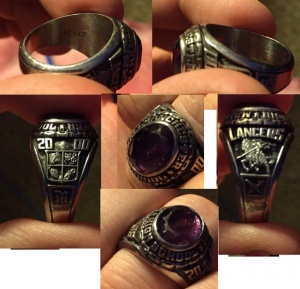 The Amnyfest Ring[2][3] (an egregious mispronunciation of "amethyst ring", as amethyst is Chris's birthstone[4]), also known as the high school ring,[4][5] is a special souvenir ring that Chris got while at Manchester High School. After Blanca destroyed his Sonichu medallion on 20 October 2008, to counter the victory cries of trolls, Chris went back on his claims regarding the medallion and said that the ring was the real source of his powers. 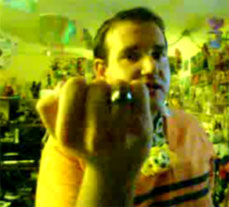 And you thought it was the medallion that gave Chris his powers.

The One Ring is engraved with "LANCERS", "CWC", an image of a lancer and a coat of arms for the class and school. The amethyst is a galaxy cut on top and a rainbow on the bottom.[7][4] It also bears the letters "HJ ULT" on the interior, a reference to the manufacturers, Herff Jones, and their "Ultra Supertone" alloy, which is 10-karat gold.

Along with the Sonichu medallion, the Amnyfest Ring went on hiatus for much of 2010. (It was theorized that its destruction by a heroic Icelandic troll led to the March/April 2010 Eyjafjallajökull eruption.) However, Chris reverted to classic form in a video released on 6 September 2010 featuring, among other familiar tics, an emphatic display of the ring.[11] He also wore it to his 2012 court hearing, and again in the April 2013 "I AM MY OWN FREE BITCH!" photos. It popped up again in the autographed photos he offered for sale on eBay in late June 2014, proving that it survived his house fire. 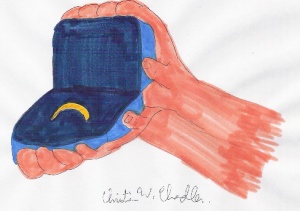 In late 2014, Thetan revealed that Chris had, unprompted, offered to give the amnyfest ring away to his sweetheart Catherine as a sign of commitment.[12] This new purpose for the ring is connected to Chris's obsession about the symbolic meaning of wedding rings. For example, he drew a picture of himself offering a wedding ring to Ivy. His drawings of the fantasy weddings of Sonichu and Rosechu, and himself and Ivy, both featured ring-bearers. He has also been long frustrated that only married women wear rings, because his noviophobia makes him afraid that he might get an ass-kicking from a jealous boyfriend if he tries to talk to a woman who has already been purchased. Unsurprisingly, he wants women who are not boyfriend-free to be legally required to wear rings.[13] We can surmise that he intended to use the amnyfest ring's power to ensnare Catherine forever. Fortunately for her, she refused it.

However, although Chris had stopped wearing his medallion during this time, this does not appear to be the case with his ring, as he has constantly been seen wearing it through 2014, even at his court hearing. This is likely because it allows him to be TRUE AND HONEST without wearing a medallion, which could be because he realizes how ridiculous he looks with it, but is probably because it would ruin his tomgirl look (despite it already being ruined by Chris' horrible choices of attire). Since Chris believes his magic powers stem from the ring, he presumably doesn't feel the need to wear the medallion.

In Sonichu Special 5, Chris transfers the ring to The Captain.

As an attempt to undo the beliefs the Idea Guys had instilled into Chris, The Captain told Chris that the ring was actually the Reality Stone (a concept from Marvel comics) and that Chris could change the reality of CWCville to whatever he wanted.[17] However, Chris continued to maintain belief in many Idea Guy concepts - such as his polyamorous marriage and characters such as Kun T’Nyuget. 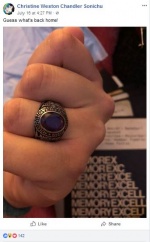