Soaked with grease and rapidly falling off, Chris's hair is one of the many indicators of his unhealthy lifestyle. 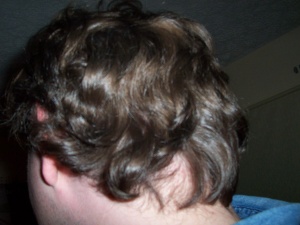 Chris's hair in all its glory, pre-Tomgirl.

Chris's hair has never looked good. For most of his adult life, Barb served as his barber. The result was a predictably amateurish, uneven cut which served as the perfect accompaniment to his clown shirt and social awkwardness. His refusal to regularly bathe, which leaves his hair greasy and unmanageable, hasn't helped. His hair has entered something of a plateau for many years, as even when he does take a shower, his hair's appearance virtually remains the same, as evidenced by his 2010 video demonstration.

Switching shampoos hasn't helped, either. In his early 20s, Chris used Selsun Blue for dandruff issues, then switched to Head & Shoulders. To assist with his Love Quest, he shifted to "AXE brand Freeze Anti-Dandruff Shampoo & Conditioner." When he became a tomgirl, he changed it again to Garnier Fructis shampoo and conditioner. He has also used Aussie Sprunch hairspray because "it keeps my hair poofy, and smells of candy." If his photographic record is anything to go by, nothing seems to have worked; firsthand observer Catherine thought it "looked like straw."

Chris, however, believes that his hair looks just fine, and has always been defensive about his hygienic habits. He also had no problem with his mother's styling. During the first Kacey Phone Call, he enthusiastically (while pretending to be Liquid) praised said haircut:

In 2016, Chris told Arthur Spatchcock that he thought his hair resembled Sailor Neptune's. You be the judge.

For most of his life he kept it short and didn't alter it significantly, but when he began exploring a transgender identity, Chris started growing his hair out, and also started bleaching his hair. Chris's natural hair color is a chestnut brown, although early photos from his childhood show that it was paler at one point. He seems to be dyeing his hair himself, based on the unprofessional results. The highly visible brown roots seen in pictures suggest that he did not enlist the aid of a professional stylist. Chris's hair is also evidently curly when it's long; he may have done it himself with a curling iron, but Chris is far too lax in his personal grooming for that type of styling regimen. An October 2012 Facebook profile picture revealed that Chris had grown his hair to his shoulders, and for the next couple of years it remained at approximately this length. 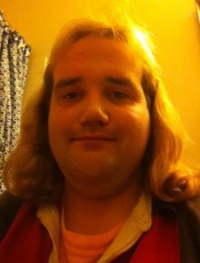 Chris has become resolutely opposed to cutting his hair, seeing it as essential to his tomgirl/lesbian identity. In May 2011, Barb forced Chris to let her cut his hair. This resulted in Chris calling Barb a bitch. He had to wear a wig for a while. He also saved a clump of hair clippings and wore it around his neck in hopes that it would grow back faster. [3]

Chris sometimes likes to accentuate his hair with a headband, in order to cover up his bald spot. Even before becoming a tomgirl, he admired his girly anime wings to the point of incorporating them into his comic. At the pride festival and GameStop attacks of 2014, he wore a pair of striking blue and pink My Little Pony tassels. Sometimes he wears ponytails. 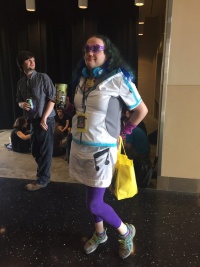 He dyed his hair blue in 2015, for his OmegaCon cosplay. Of course, he again failed to bleach the hair beforehand. The result is that his hair gradually turned to a sickly green color. 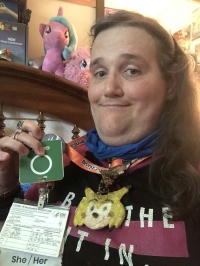 Chris after his second vaccine shot, showing his now-grey hair.

As of 2020, the green color has finally begun to fade, showing that Chris' hair is now very grey.[5] Hair turning grey at a relatively young age is a sign of poor health, or getting the short end of the stick when it comes to inherited genetics.[6] This can be clearly seen in a photo posted to Twitter in May 2021 of Chris posing with his Coronavirus vaccination card. 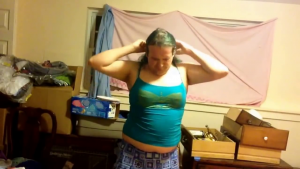 Pictured in 2015: a prominent bald spot on the top of his head, typically concealed with a headband (which had slipped off in the still image).[7]

Chris's encroaching baldness has done little for his already uncomely appearance. Since hitting his late 20s, his hairline has been receding very quickly. When confronted in the Mailbag (17, 25 and 28) about his obviously thinning hair, Chris asserted that he was not going bald, and he was untroubled. "When it goes, and if I do go bald, I will deal with that when I cross that bridge", he declared.

In videos taken of Chris at a Fridays After Five event in 2010, a bald spot was seen starting to appear on the back of his head. By 2014, at 32, pictures showed that his hairline had receded dramatically in just a couple of years, and his hair was more poorly managed, looking even more thin, wispy and unkempt, if that's possible. While his hair is long, it has simply stopped growing on the front half of his scalp, creating an extremely bizarre effect. His attempts to brush a few locks forward do little to hide his constantly growing forehead. Catherine claimed in 2014 that it was "halfway" back on his scalp. The bald spot can be clearly seen in a photo of Chris with the Praetor team in October 2020.

It should be noted that if one alters a photograph of Chris to remove his bastardized bangs, his hair looks almost exactly the same as it did before 2013 – slowly thinning and as greasy as ever. 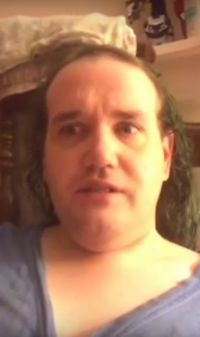 2016 saw the rapid acceleration of Chris's receding hairline. Cole Smithey seemed to begin shaving his head regularly around his early to mid-thirties so the timing seems about right for Chris's male pattern baldness to follow suit. Chris's ever poor hygiene and increasingly gross neglect of his remaining and now green mop-like locks certainly did not help. Chris's current hair is less that of a transitioning female, and more of a Doc Brown mixed with seaweed.

A popular theory among trolls proposes that the baldness is a physical indicator of the stress Chris claims they put him through. Realistically, however, Chris just drew an unlucky ticket in the genetic lottery. Photos of his half-brother Cole Smithey show that Cole lost his hair up front relatively early in life as well, and Bob also showed signs of hair loss too. Ominously, inactivity, poor diet, illness and stress are well-known to accelerate the balding process. In addition, there is a strong correlation between the man's age with the eventual extent of the baldness – the earlier it begins in life, the less hair will eventually remain, which does not bode well for Chris's tomgirl dreams.

In recent times, Chris has taken to wearing a cap or pulling his hair forward to cover his receding hairline, and possibly to mimic various anime characters and drawings he's seen of attractive women doing the same thing. It really doesn't do his appearance much good. 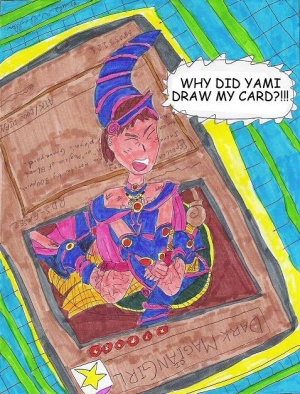 Chris has never found body hair attractive, on himself or anyone else. This is probably connected to his hatred of men and their bodies, and it began long before he became a tomgirl. In 2008, he confessed that "shorts are okay, but I don't like to show off my hairy legs."[8] A strange Yu-Gi-Oh! card shows him dressed in the costume of a female character, but deeply embarrassed, in part because the dress exposes his legs, which he depicts as covered with hair. He also claimed that "facial hair, to most women, is a Turn Off," which is his autistic way of saying that he thinks beards are ugly. Consequently, early nudes of Chris showed that he shaved his torso and pubic region. 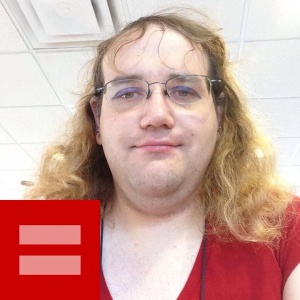 Chris with visible stubble on his chest from shaving or waxing.

It is telling that part of his costume meant to throw off the trolls included a goatee. When he needed to reclaim his identity, he pointedly shaved it off for the camera within two weeks, without shaving cream or even water at the very least.

After becoming a tomgirl, he put more effort into removing his body hair, at least initially. He told Jackie:

He also said he had given himself a "Brazillian." A Brazilian wax consists of the removal of all pubic hair, something Chris has clearly desired for a long time.

Despite Chris's efforts, photos throughout 2013, 2014 and 2015 consistently showed that, on his face at least, whatever depilatory measures he was taking were an utter failure, as his facial stubble - his "5:00," as he calls it, is always apparent. As with every aspect of his life, his laziness thwarts his dream of looking like Britney Spears.

Chris told Cassie, co-founder of Sonichu Girls, that his mother had recently cut his hair and he had saved locks of his hairs so all the Sonichu Girls could have them as a souvenir, he even went to the trouble of wrapping each individual lock in plastic along with a certificate of authenticity signed by the big C himself. Chris's faithful fangirls couldn't refuse the offer.

Due to the Mexican postal service, it took several months for the hair to reach Cassie. When it finally did, it was a shock - or perhaps it wasn't. Cassie described the hair as being "greasy" and having an odd odor. Evidently, Chris's hair is so filthy, the Mexican postal service, which regularly "unknowingly" ships countless pounds of cocaine, marijuana, and other illegal narcotics per year, had trouble dealing with this biohazard. Fortunately, this violation of United States Code: Title 16, Chapter 4, SubChapter IV, § 1203 (a)(4-7) did not cause any national or international incidents.

While Chris promised 200 locks of hair, only 23 were ever sent. Chris included a letter to Cassie, in English on one side and in Chris's version of Spanish on the other. Each side had a Sonichu drawing, but the Spanish side had Sonichu in a sombrero.