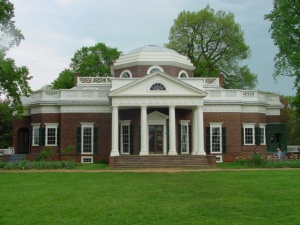 The "village" of Monticello

A Hike is a video Chris uploaded on 9 October 2010. As part of Chris's commitment with Jackie to make a video for each day in October, Jackie suggested Chris film himself hiking in the Blue Ridge Mountains, though Chris was too cheap to go there (he had been there with Bob using his "Seinor pass"[1][2]). Top men calculate that the filming took place at the Saunders-Monticello Trail.[3]

The result is a rare video that sees Chris active during the day and outdoors. The video is broken up into small chunks with Chris alternating between hiking and filming, presumably the exertion from walking up a slight grade requiring all the energy he can muster. In what can be considered the spiritual successor to the "Parkay" video, he is immediately out of breath after the first cut and continues to deteriorate from that point. Along the way, Chris rambles about various things he finds, including fallen trees, and dry stream beds, which he repeatedly mistakes for 'rivers'.

What could be a 2ft stream, Chris considers a river 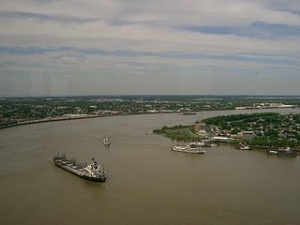 The Mississippi River is 20-30ft wide

What could be a tiny creek, Chris considers a BIG river 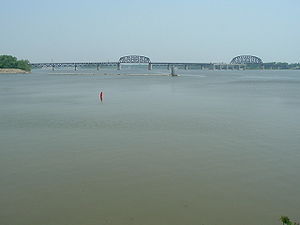 The Ohio River is one mile wide

What could be a 5ft deep ditch, Chris considers a chasm 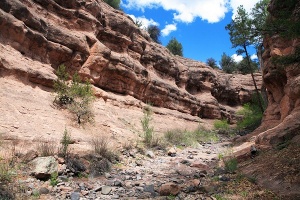 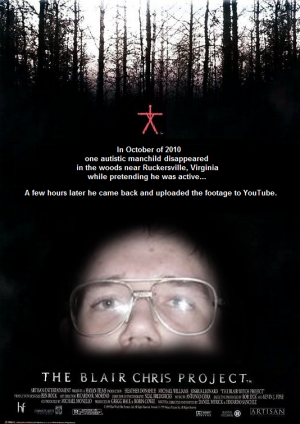 The parallels are eerie.

0:00-0:14 [Chris is filming himself with his handheld camera. He is sitting in his car in broad daylight. Children scream in the background]

Quarter after three now. I'm gonna be making my way up a mountain trail nearby The Monticello. I'll check back in about a quarter of an hour. I've got my OFF!, an' got my camera here and my phone. Be okay.

[Jump cut, Chris has begun to labor in his breathing]

0:15-0:27 Ah, just a few minutes into my little hiking trail. So I walk off course to visit the little woodland theater or Palmer that my congregation and I visited one past Sunday

0:27-0:35 [Chris walks up to the stage of the theater and pans the camera around the sitting area]

0:38-0:55 Annuder trail has gone esplored by me, so I'm gonna take a little look up the trail and see what's up this way. Check in in a bit, it is quite a mysterious forest. Along the mountain beside The Monticello.

0:55-1:10 Hm. A tree that has been uprooted by a past weather event, along the side of this path. Deep in the chasm, that forms a river. Which could be a river, if there was more water in it.

1:10-1:31 Deeper and deeper into the forest the trail goes, where it leads? I don't know yet. There's a rock with moss. Moss grows on the north side. On tree bark or rock formations. I just walked across a wooden plank.

4:14-4:55 Ah, look at this, a bit of an open field. A field that is open for play by one animal or two, or so. Quite possibly, many more. I think we go this way in the fork of the road. Other way goes back to civilization and I'm not ready to head back just yet. Look at that [Chris points the camera at a tree] a shade of red on this tree. One would suppose, rotted? Or dead wood? Or perhaps it is just dirty from dirt and grime thrown upon by its wondrous past.

6:28-6:46 I'd care to comment, but you know what? I'd just prefer to marvel on nature and its revels. A bug buzzing about me. Not busy as a bumble bee.

8:01-8:20 Well I think we've reached the end of our trail, not too many ways to go, yeah? We have reached a dead end. [Camera clearly shows the trail continuing off to the right, despite Chris's claims to the contrary]

Rest a moment and I'm going to head by to my car. Take a hiking trail of your own, if you will, in your own forest where there in dwell.

8:21-8:30 Another commentary note, if you will, for down that big trail at that major fork with the clearing, we find an overlook. Let's take a look over.

8:30-8:38 [Chris approaches the overlook and shows a view of plain trees and grass]

8:38-8:47 Hm. Vast glorious view from here. As was portrayed and enjoyed by the Carter family.

8:47-end [Chris points the camera at himself. He is flushed, pale, and drenched with sweat]

Signing off now, y'all take care and be s-