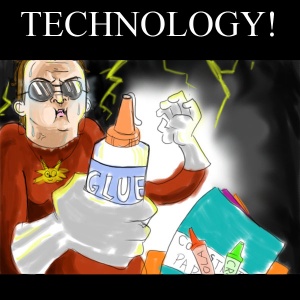 How Chris uses science and technology to achieve his ultimate transformation.

ECV 00002 is a video uploaded on 10 October 2010 in which Chris uses the power of Random Access Humor and jump cuts to transform into his Super-Mode. Jackie requested this video two days prior.[2]

The results are mixed; Chris at least attempts to use the same pose and positioning before and after the jump cut, but this baby step towards competence is overshadowed by a retard-fall back by the slip-shod cosplay self-paint job. An odd, incomplete white field over most of his face meant to resemble Sonic/Sonichu-style eyes, a cone-ear constructed out of construction paper (which regularly falls off, despite Chris's lack of movement), and a white "chest-fur" patch, which is supposed to be an outline of the Medallion of Fail only serve to further damage Chris's physical appearance.

[Jump cut. Chris is now dressed as Chris-Chan Sonichu. The transformation straightens his back, lowers and bends his arms, and moves a few items in the background]

Anyway, live an honest life, don't curse, don't badmouth people... It's just not cool. You know? Don't pic- don't torture me. At least I am doing this and... I have myself a woman, so there. So she'll appreciate this very much. She appreciates almo- everything I do for her. Especially these videos.

Jackie, I love you. I want to hold you in my arms, sweetheart. You come over right on here and we'll do each other right. Sweet times...