This was a fluff piece on the Pokémon fandom, which is popular among small children, suspicious-looking men, and emotionally-stunted manchildren. Chris (then aged 17) happens to be among the small children playing the game. The cameraman seems to linger on him for an abnormally long amount of time, perhaps because they're not used to the thing they're seeing. There's also a historical inaccuracy in the coverage: The Pokémon phenomenon started with the video game series, not the TV show.

Female Newscaster: Well, if you have grade-schoolers in the house, they'll probably be interested in this next report, and if you don't, you can learn about a craze that's been sweeping the nation. NBC 12 reporter Jim Babb marched into the marketing breach today to bring us this story of Pokémon. 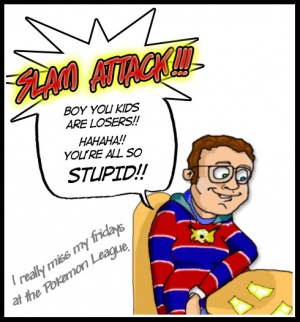 Chris: I'll switch-I'll put out my Dragonair... Even though it has sixty damage on it... Oh, boy, now I have three energy on it. Slam Attack!