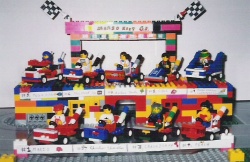 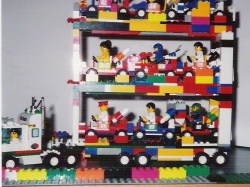 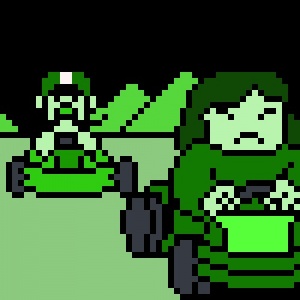 Mario Kart 64 Lego Raceway is a video series featured on Chris's "Yep, I'm on TV" DVD. It was filmed using a Game Boy Camera in 1998, when Chris was still in Manchester High School.

The Game Boy Camera is a bulky Game Boy accessory cartridge with a camera built into it, which can be placed into a Game Boy and be used to take grainy black-and-white pictures. Afterward, these pictures can be edited in various ways; they can be drawn on, turned into sprites for a handful of minigames, be printed out with another expensive accessory called the "Game Boy Printer", or strung together to make an animation as Chris did. Using the camera and his Lego collection, Chris made a stop-motion animation of the cars racing around his Lego city and firing shells (or in this case, Star and Circle shapes) at each other, then added some appropriate music.

The Game Boy Camera can only hold thirty pictures at a time; that isn't nearly enough for even half a lap. What Chris did was take the thirty pictures, edit them appropriately, string them together into an animation, record the animation, and then repeat the process over and over. To make the sudden starting and stopping seem more "natural", Chris put a second of static at the end of each set of pictures. This didn't do anything to change how the twenty-second music clip Chris used for his animation gets more grating every time it is used.

It is impressive that Chris expended so much time and effort at such a complex and frustrating task, especially considering that years later, he would draw Sonichu comics without any planning or practice and upload YouTube videos without bothering to check them over first. Despite this, the actual animation is jerky and erratic, presumably due to the extremely low frame-per-second count (the average stop-motion production has 12 frames per second).

In the actual race videos, it's near impossible to tell what's going on, since most of the racers look exactly the same in poor quality black-and-white pictures. It doesn't help that the racing is regularly interrupted by confusing sequences where outsiders attack the racers.

The sequences also appear to have been transferred onto VHS tape at some point, as evidenced by the vertical stabilization problems, the noise at the bottom of the picture at the beginning of the first video, and the general picture quality of the video. Chris got the video on VHS by putting the Game Boy Camera into a Super Game Boy, and hooking up his SNES to a VCR to record it from there.

Most of the video is taken up with depicting four kart races based on Mario Kart 64​. As with all of Chris's projects, the characters competing are from Chris's family, gal-pals, and characters from his favorite media series - in this case, Lego, Power Rangers, Super Mario, Dexter's Laboratory, Star Wars, a ninja and, bizarrely, "Andy Griffit". Some Pokémon show up too. Oddly enough, there is no sign of Sonic, or even Bionic the Hedgehog (who had been invented two years earlier).

However, what is very easy to tell is that even in his younger days Chris was a God-moder; in all three races in which Chris appears, he wins easily - in his second race, he even has time to fight Darth Maul and get back on his kart in time to win.

Chris also spends some time in-between races describing his Power Rangers team, made up of him, Cole Smithey, Laura Dorazio, Peach, Mario and Mega Man. Unsurprisingly, Chris makes himself the leader. He also spends almost a minute (and several takes worth of animation) showing several karts combine into the KART MEGAZORD, a powerful weapon never seen since until Sonichu #9, and even then it hasn't really done anything yet.

He also supplies a tour of his Lego town, which he had not yet christened "CWCville", which features an Information Center, the Start/Finish Line, Lego Lake, Mt. Extreme, Band Stand, and Fonz's Kart Shop.

[A screen reading "ANIMATION: Press (A) to begin" appears before the video freezes.]

[We see a Lego minifig in overalls and a conductor's hat. The label says "Mario."]

[We see the racers waiting up at the starting line. The camera circles around giving us a 360 degree view. The starting light changes, and the race is on!]

[Christian has the early lead, and he turns left into a shortcut. Mario tries to follow him but hits the edge, spinning out of control.]

[Chris drives onto a bridge, followed by QUEEN GYPSY MOTH. Mario again spins out of control, missing the bridge entirely.]

[Jailbrake Joe and Power Ranger Chris go on the bridge.]

[Zoom in on Power Ranger's wheels. White dots come out of the back, as though he is revving up. He backs up and corrects his direction.]

[We see Chris crossing the bridge. QUEEN GYPSY MOTH is at the head of the pack, and Chris cuts her off.]

[Power Ranger Christian picks up a bonus and fires at Cole, sending him into a spin]

[Chris crosses the line in 1st]

[Luke Skywalker drives up, gets out of his car and brandishes his lightsaber. he gets back in, turns around and drives away]

[The racers line up at the starting grid. A spaceship flies around in circles.]

[The race begins. Some sort of powerup or missile or something hits a car.]

[The racers finish a lap, with QUEEN GYPSY MOTH and Mario in the lead]

[An airplane flies around]

[Arthur Fonzerelli [sic] shows up trackside. He walks up to a car, presumably to fix it, and BONSAI draws his katana.]

[There is confusion around the crash site]

[A mechanic tries to fix it up]

[The race finally ends, with Infomaniac in 1st place]

["While we prepare for the next race, we will take a quick tour of... MY LEGO TOWN!"]

[The racers line up and the race starts]

[The race passes something labelled "CRYSTLE"]

[QUEEN GYPSY MOTH stands in front of the race]

[The racers just hit her and keep going]

Peach: Why are you here?

[Chris drives on, in the lead. The other racers follow.]

[Darth Maul ejects from the downed X-Wing and stands trackside. The approaching Chris is shocked.]

Darth Maul: JOIN THE DARK SIDE!

Chris: NO! IT'S MORPHIN' TIME!

[Chris casts Maul off of the track]

[Chris drives on, and somehow, is in the lead. He crosses the finish line and the words "1st place" appear.]

[The top four are lined up]

[Camera flies down to: MEGA MAN. LUIGI. PEACH. They each put on Power Ranger costumes.]

[They stand in triangle formation. The title "POWER RANGERS" appears.]

["AND WHEN THEY NEED MORE POWER... THEIR KARTS JOIN TO FORM"]

[Karts join together, then drive around a bit.]

[They line up to start. Pikachu zaps the starting lights and the race begins.]

[A truck is on the track, for no clear reason. The racers drive by.]

[A car goes into a spin and causes a pile-up.]

[We zoom in on Ash Ketchem [sic]. He throws a Poké Ball at Mew.] Ash Ketchem: GO! POKÉ BALL!

[The race continues. A Blastoise fires water at the leader and she spins away.]

[A Venusaur sleeps in the middle of the track. Chris stops his car and plays a Poké Flute to awaken it. The camera zooms in on a man going to a house]

Man: NOBODY WAS AT HOME!

[Camera zooms in on a Charizard]

[Chris crosses the line; "1st place" appears. Infomaniac is 2nd, Cole 3rd, Mario 4th. The final results are then listed on the screen.]

[Zoom in on Bob and Barbara]

["And CWC's parents were proud of him."]

["PRODUCER: BARBARA WESTON CHANDLER -MOM." with a photo of her]

["This animation was inspired by LEGO & Nintendo"]

["SPECIAL THANKS: Mom, Dad, many of my good friends, family, the Leo & N.O.A. Companies, and Christian C."] 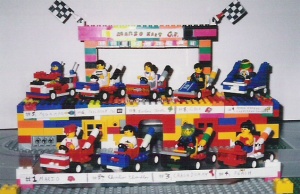 Line-up of the racers.