DivineTrial is a video Chris uploaded on 30 October 2010. In this video, Chris dresses up as Divine, the famous crossdressing actor who played Babs in the 1972 cult film Pink Flamingos and then re-enacts the trial scene from the movie with a Shadow doll substituting for Clyde Cash as the culprit. What Chris doesn't know is that when a case is dismissed, the defendant cannot be sentenced, as is it here.

[Chris stands in front of the camera wearing clown makeup, his shirt stuffed with his plush breasts and a red sheet of construction paper covering his crotch.]

Chris: Hello, folks... and darlings! This is Divine Babs, y'know. We are going to go on a trial now fo- to go against... our culprit here, mister Clyde Cash. Say hello to the audience, Clyde.

[Chris holds up a Shadow the Hedgehog doll supposed to represent Clyde.]

Chris: I ain't got much to say, huh? Well, that's a shame. Clyde, now, you spoke to me on live Internet before the trial here was started.

Chris: He stands accused of being a troll, a bully, and especially doing all these things against one Christian Weston Chandler and his Sonichu and Rosechu family! We bring in a witness here today, of which we will put that against Mr. Clyde Cash here. He's a witness of a- Son- Sonichu, the- the original one.

[Chris holds up a Pikachu doll, modified to resemble Sonichu.] All right, Sonichu... do you swear to speak the whole truth, the whole truth and nothing but the truth, so help you God?

Chris: All right, then, will you please point out the guilty party of this room that has done all the trollings and dwollings and all that and even... personal... threatening and whatnot against Mr. Christian Weston Chandler?

Chris: Thank you, that'll be all, you may step down from the witness stand. All right then, we will now have order in the court! Order in the court! [Bangs the table with a coffee cup] I have reviewed all the case files and what not, and in this kangaroo court justice, I hereby... pronounce sentence to Mr. Clyde Cash. He is guilty of all charges! And then- and... on the lawsuit here, for his punishment, he will be shot to death... and his wi- and his wife and one-cent daughter will go to a better husband... outside of his family. One will be provided for her by law. Somebody within her local reach, but not from the state of Virginia. 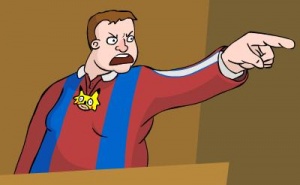 But anyway, the punishment is death for Mr. Clyde Cash... for doing so many wrongs against Mr. Christian Weston Chandler. Case dismissed! [Bangs the table with his coffee cup again]

Chris: Are you ready for your execution, Mr. Clyde Cash?

And that was another fine episode of Divine's people court. You all enjoy- you all have yourselves a good day! And remember, Divine is... the filthiest, dirtiest person in the world! Even though I've temporarily dyed my hair brown! It's usually blonde!