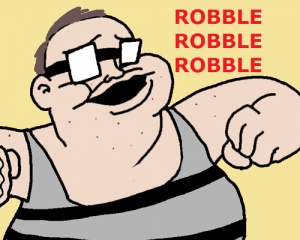 100 2265 is a bizarre, nonsensical video Chris uploaded on 3 October 2010. In it, we see Chris, clad in his female support garment and what appears to be some sort of black wrapping, babbling about hamburgers in an incoherent manner. He tries to imitate the fast-food icon the Hamburglar by prancing around his room shouting "robble robble" in a nasally, high-pitched voice. Once again, Chris somehow manages to screw things up as his costume lacks several key elements. 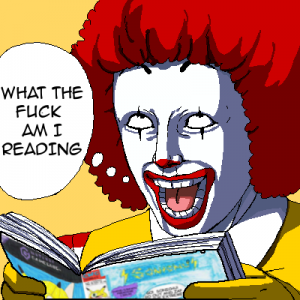 Ronald would like to congratulate the CWCki's experts of video transcription... not that the transcription helped him much in this case.

[Chris appears in his muscle bra with strips of black paper taped over his rotund figure. He has likewise taped over his eyes, to imitate the Hamburglar's mask]

[Some of the tape has fallen off, Chris adjusts it.]

[Chris points to a blurry, out-of-focus image of a Big Mac on his television]

[Chris moves closer to the screen and begins gesturing at the image.]

[The image of the Big Mac briefly comes into focus.]