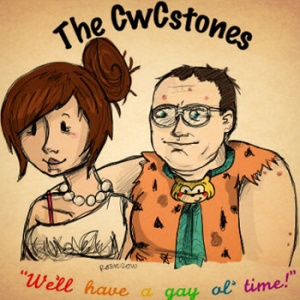 We'll have a gay old time!

100 2277 is a video Chris uploaded on 12 October 2010 in which he dresses as Fred Flintstone, then cosplays as Homer Simpson cosplaying as Fred.

Right away, the viewer is bombarded with a badly-paced attempt by Chris to sing the theme to The Flintstones. The resulting voice is more along the lines of a frog who sings only in flats than anything else. His latest costume is a even simpler version of Fred's one-piece toga/loincloth outfit: a single sheet of orange construction paper with black dots scribbled on it.

After an obligatory stolen quote, he sings an equally bad rendition of The Simpsons parody of the song, complete with a "mask" of Homer's face. 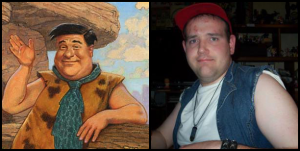 [Chris puts on a terrible accent.]

[Chris shows a toy of the Flintstones' Stone Age car, and plays with it throughout the video, as if it was being driven through the air]

Let's ride, with the family down the street,
Through the, courtesy of Fred's two feet! [Chris's fingers-mime a walking action in front of the toy]

When you're, with the Flintstones,
Have a yabba-dabba-doo-time,
Dabba doo-time, [Chris's "costume" begins to fall, distracting him from singing]
[Mumbled], We'll have a gay old time!

And now for something... suh-lightly different!

Simpson, Homer Simpson,
He's the greatest guy in hiss-store-eee!
From the, town of Springfield;
He's about to hit a chestnut tree!


[Chris pulls out an accessory to the yellow mask: an accompanying mouth to:] YAAAAAAAAAH!