SHE IS MINE NOW 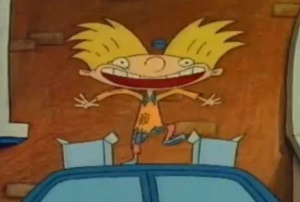 "I will kick your asses. Because I'm crazy."

SHE IS MINE NOW (officially 10292009 - Re to Chris No 2 - SHE IS MINE NOW) is another call out to the real Chris from Ian Brandon Anderson, uploaded on 28 October 2009. In it, he raps again and declares that Kacey is his and that Liquid lost her.

Ian plays a wide array of Aerosmith tracks in the background, undoubtedly in an attempt to seem rebellious and dangerous. He shuffles back and forth throughout the video and seems to have aged considerably since yesterday. He also finally changed his shirt.

He also does his Donald Duck impersonation...that or another rage attack. Who knows?

It is also important to note that Ian seems to be sweating a fair amount in this video and can be seen wiping sweat from his brow. The sweating appears to become more profuse towards the end of the video compared to the somewhat dry start.

Original video from the real Chris

[Liquid Chris steps back from the camera and performs several fighting moves similar to the ones seen in CWC Fighter.]

I am the only one here who is fit for Kacey! [Jump cut] And another thing! [Jump cut] Uhh. Yeah this one's for you.

[Steps away from the camera]

[Jump cut. Liquid Chris is close to the camera again.]

So yeah. Jack Thaddeus, Gregg Mays. They're on my side now. Mmm. So get ready, arch-nemesis. I will be waiting. And to the rest of you, peace, eh.

[Ian begins "rapping" while Run-DMC's cover of "Walk This Way" plays in the background]
I seen yo video, yous a lame ass
You done copyin' this and that
I'm gonna screw you, I'm gonna take you to town
Who do you think you are, Eric Cartman?
[does a surprisingly okay Eric Cartman impression] Screw you guys, I'm going home!
You had all with the sweet little girl
And yet you break your promise!
You done turn your back on her and turn to the trolls!
You just a dang dummy!
And you still chicken you's a dang coward!
If you wanna come fight me,
Come fight me in person!
Come out from behind the camera, you FOOL!
I'll fight you any day!
Poop-pow! [flails arms in an obscene mockery of punching]
And I'm gonna just plain kick yo ass!
From-looking-at-your-body-type, you's a total width and shorter than me!
I'm a good 5 foot 10, what are you, like a 4 foots 8?
I tell you something right now
That ain't gonna let you laid,
Yet you had it once with her and you let it down
You's a big ol' dang...stupid lame-ass clown.
Because you know you had all the blessings
She was smart she was sweet she was riwwyvery fun!
And I'll tell ya what ya did...
You...she done left you boy!
You lost her! You treated her like a dang ragdoll!

[Changes track to Aerosmith's "Rag Doll"] Dang ragdoll...
And she ain't no ragdoll, she's a caring human being!
And you is--and you is a dang fool for mistreating her like you did.
And I love her for--I love her for so much more than that.
And you so dumb...and you threw it all away, man.
She left you and now she's with me.

[Changes track to Aerosmith's "Dream On"] So, at this point, you could just... [turns back and awkwardly fast forwards through the intro to the song, and wipes his forehead] So, at this point man. I'll tell you what you could do, because all your notions you had...with lovely, with sweet Kacey. This point, you could just...dream on. Cause she and I we share [Changes track to Aerosmith's "Sweet Emotion".]

[Changes track to Aerosmith's "Love in an Elevator"] ...LOVE IN AN ELEVATOR! LOVIN' IT UP IN AN ELEVATOR! I mean, I tell ya. I tell ya what, man. She done leave you--she done left yous mang. She come--she come towards me. Because she's beyond beautiful.

[Changes track to "Beyond Beautiful" from the Aerosmith Track Pack, awkwardly fast forwards through intro again and then sings mumbles along, badly] She loves me now, she loves you not! Listen to that! Listen to the words of Aerosmith! She's beyond beautiful, and she's beyond...brilliant. She is so kind. She cares a lot. She cared about you, too. But you done turned her down, man. You lost her. So face facts man. She's with me Mac- she is with me now. You're yesterday's news. Just like the- just like the boat that the MythBusters made out of newspaper and ice. Yesterday's news. Good show by the way, I learned from it. So you can just move on, Buster Brown! 'Cause Mama Brown ain't gonna take that no more!

Yeah... and I will kick your ass, 'cause... I'm crazy! [gibbers violently at the camera, pauses, then does a more effete version of gibbering at the camera]

C'mon! You come fight me in person, and I'll kick your ass! Come on!

Kacey, you understand, this… this Ian, this… you do not want anything to have to do with him. I will win you back! I promise!

Here he is MC – the MC CWC, throwin’ down his favorite rhymes y’all! Yeah, okay.

[The beat from Eminem's "My Name Is" begins playing (yes, just the beat, because Liquid Chris can actually play songs with the lyrics cut out)]

Kacey doesn’t love you – it’s true!
I checked her email this Tuesday at seven-oh-two
She has more apprehension than someone like you
Having his semen, and drinking it too
In orange Fanta, chocolate syrup, you just can’t refuse
Mothafuckas online think that it cannot be true
But you prove them wrong, bottoms-up is yo motto
So it slides down yo throat, like a melty gelato
Wearin’ that bathrobe, like greener than avocado
Mashed up in a bathtub, infested with live mold
Your shower got a problem with that, so I been told
In fact I’ve seen it – you’re twenty-seven years old!
You get naked on camera and dance around like ten-fold
Fuck you, nigga – you makin’ my head explode
You know, with the stop-this and the stop-that
And the expose of your ass-crack
On the camera, it was so wack
Look like Jack Black, on your last track
Mothafucka, I’ve never tried kickin’ an ass this hard
But I’mmabout to chew up and spit y’all about one million yards
I’ll take yo picture and send it to yo bodyguard
Now everybody yeah, sing along


Now everybody drawin’ the comic pages for ages
The sages of rage, and the age of contagion’s voracious
And pages, like the mothafuckin plague is
Upon a plantation and faces just can’t explain this


Sorry – didn’t understand that?
Understand my ass-crack!
I’m back in black – and so’s my battery
Runs on AC/DC,
You don’t deserve to listen to a band so legendary,
Get the FUCK off of Kacey,
Blaze me? You’re pasty!
You can’t stop me, or block me, or amaze me.
You won’t even come to her rescue, ‘cuz you’re lazy!
It doesn’t phase me that you’re crazy,
‘Cuz if I see you try to contain me,
Then when I kick your ass, and salt and shake thee


Shove it up your ass
Like a certain
Medallion


Then I’m gonna turn you into
A murder
Statistic


Yeah. M’kay. Yeah yeah, yeah, m’kay, yeah you listen to that and you take in the words from that.

Peace, and have a good day.