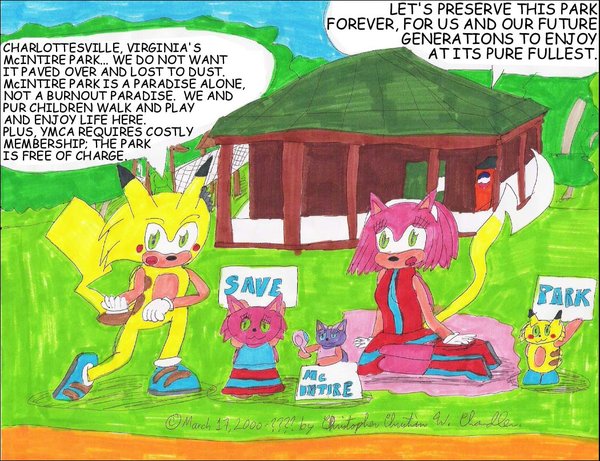 Save it to the extreme, you two!

NO D*** WAY, IMPOSTOR!!! is a video uploaded on 14 August 2009. This is Ian's response to Liquid Chris's finale. The video contains the first appearance of Ian's sign to save McIntire Park, which appears later in a video recorded from Charlottesville public access television. Yet again, Ian rattles off his personal info in order to somehow prove he's the real Chris. He also curse-ye-ha-me-has Liquid in the most spectacular display of the attack in all of Christory.

Oh no you don't, Chris! You're not getting away that easy! You do all that, I will SUE your sorry ass! And I wanna tell Nintendo in Redmond right away to stop you, because they know as well as I do. I sent them a letter previously, months and months ago, for the origi-for the original printout of the Number Zero book. They know! They have the records! They know. I have been a customer of them for years! They have had my money a bunch of times! Long before I made up with Sony and gave them over two th... [suddenly trails off and twitches his neck and left arm, realizing that he's undermined his own point about being a loyal Nintendo customer] Agh... [performs an incredibly effeminate, limp-wristed swatting gesture toward the camera as he utters an odd squealing sound; he then quickly raises his left arm again, before dropping it] Nintendo has like five TH- over five thousand dollars worth between me and my parents, but anyway. I'm st... Anyway, you are not- you will not secede. [Points finger at camera] You are the IMPOSTOR!

[backs away from the camera] You are the impostor! STOP - THAT - BROWN - STRIPED - IN - THE... [trails off again in confusion] shirt... [nods head] WITH THE PAPER MEDALLION! Stop that impostor! [Shows a drawn cardboard, the Sonichu McIntire Park sign] Sonichu and Rosechu are mine ALONE! I am the Christian Weston Chandler, [begins to speak at a ridiculous speed] born with the birth name of Christopher, February 24th, 1982, I'm the one with Robert Franklin Chandler, Jr. as my father and Barbara Ann Weston Chandler as my mother, 14 Branchland Court, Ruckersville, Virginia 22968, (434) 990-0198! STOP that IMPOSTOR bastard who has been posing with MY name, MY address, MY phone number, EVERYTHING! STOP HIM! HE DESERVES NOTHING!

[reappears without glasses] Especially after that disclaimer video I made, where I told everyody not to buy anything from you. I warn Nintendo, and Microsoft, and Sony: do not buy anything from him either. He's the impostor, I'M the real deal. Look at the history on ED and everywhere else. You will rot in jail, mister... Ssss... You will rot in jail. Nintendo has known me for years, so long- so much longer, practically my whole lifetime. They know me. And they know you to be the impostor! You go into Nintendo's doors, they will kick your ass out. Nintendo, Microsoft, Sony, stop him! Put him in jail! Call the police on him! ...Anybody else in my true loyal fanbase: do the same thing, please help me, put him in jail when you see his sorry face.

[Chris is now wearing his glasses again] And you know what? Let's top this off. [unsurprisingly, he removes his glasses] Right now. No "shin", we're going for the original. Just for that impostor that has worn the brown stripes all this time. Hmmm... Curse-ye-ha-me-

Call the police on him. [sighs irritably] Have a nice day.