Shigeru Miyamoto (Japanese: 宮本 茂) is the creator of some of Nintendo's (and gaming's) most legendary video game franchises such as Mario, Zelda and Star Fox, and is a colleague of former Nintendo of America president Reggie Fils-Aimé. Back in 2009, he engaged in preliminary discussions with Chris regarding the possibility of making a Sonichu game for the Nintendo platform. Unfortunately for Chris, these discussions, and the opportunity to develop a Sonichu game franchise with a major gaming label, ultimately fell through.

Eventually, it came to light that "Miyamoto" was none other than Clyde Cash, using the Nintendo programmer's likeness as a disguise early on in his trolling career.

On 15 August 2008, Chris asked his fanbase to persuade Nintendo and Sega to open discussions with him to create a video game based on his Sonichu character.[1] In response, a troll sent this e-mail to Chris. (The awkward backslashes are a side effect of the software used by the troll to forge the email headers.)

Dear Chris Chandler,
Good evening. My name is Shigeru Miyamoto. Perhaps you\'ve heard of me. If you haven\'t, then allow me to introduce myself. I am the general manager of Nintendo and creator of Mario, Zelda, and countless other franchises.

I normally do not talk directly to fans in this matter as I am a very busy man. However, over the past few months, I have received countless amounts of emails from your fans stating that you wish for my company and Sega to create a game based on your fan character.

I am sorry to say this but I cannot and will not allow this to happen. There are several problems with your proposal, the first of wich [sic] is the simple fact that your character is NOT original. You can not make a game by combining two characters from opposing companies and then call it a new game. Things do not work this way.

Second of all, I have read your comics and they would not make a good concept for a game. It seems as though your comics are all about you and your personal problems.

You seem to have created a sort of alternate reality based around you and you only. You must understand one thing if you want to make a game. Video games are a medium where you must think of what other people want. Nobody wants to play a game where it\'s all about you and you only. Nobody wants to play a game about a person\'s inner thoughts and their problems with the world. People have problems of their own. People play games to escape from the problems of the real world, into a reality that they can feel a part of. Your game idea doesn\'t provide that. It only focuses on you and the things that bother you.

Third, I have already spoken with the president of Sega and he even thought that it was proposturous. Not only that, the amount of cooperation it wiould talk to make such a game would never work in reality. Even if we did merge Pikachu and Sonic, who would take the credit for it? Sega would lose the character that basically is their identity and Nintendo would end up with a character that quite frankley just isn\'t an original or new idea.

I\'m sorry but we can\'t do this and we outright refuse to have any part in your game idea proposal. Please stop sending us emails about this as it is simply not possible or probable for us to even entertain such an idea.

Please don\'t take this too hard on yourself. Maybe someday you can come up with an original idea and we can work togehter [sic]. But right now, you don\'t seem to have anything that can work as a video game. I wish you luck in your future endevours and I hope you have a nice day.

Shortly after receiving the above, Chris posted the following entry on his Sonichu.net blog. Chris's flat out refusal to acknowledge the unpleasant truth proved to be an early example of his delusional thinking.

The Big Brain behind Super Mario, Zelda and other Popular Nintendo characters and games, Shigeru Miyamoto, sent me an e-mail with his response to the Sonichu Game Project. He says Nay, but I bet's he could be holding out on us, or something. So, I say this unto you, my loyal fans, continue with the e-mails and Forum Talks with Nintendo and SEGA of America or Japan. They are missing out on a REAL Profitable thing they can work with me on and cash in handsomely. I sent a detailed reply, but it came back to me in a "Mailer Daemon" message, so I've taken the liberty of printing a copy of the original message, and a copy of my reply that I will send to Nintendo of America for them to transfer to Mr. Miyamoto himself. Give them time and messages. 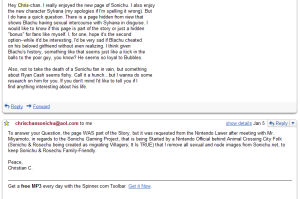 Christian discussing his censorship because of Miyamoto's intervention.

In January 2009, Chris started to receive a new series of e-mails from Miyamoto that were more receptive to his ideas than previous correspondence had been. Chris quickly overcame his lingering suspicion regarding the authenticity of the previous email encounter, as the new emails informed him that Miyamoto was interested in meeting Chris to talk about creating a Sonichu game after all. 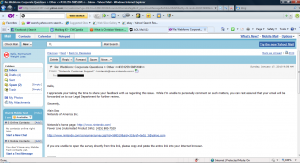 Eventually, Chris received a legitimate response from Nintendo. Only then did it become clear to Chris that he had, yet again, fallen victim to the trolls. However, instead of admitting defeat, Chris hailed his discovery a victory.