Dillin Thomas is a former Youtuber who created videos centered around the Sonic the Hedgehog series, sometimes making videos on particularly off-beat members of its fandom. His videos on Chris often involved him reading this very wiki and commenting on it.

Taylor is a commissions artist.[1][2] As late as July 2021, the two were a couple.[2] Chris has had some interactions with both of them.

Dillin has interacted with the Watchmen and assisted in the shutting down of the "Arbitarch CWC Alliance" discord server but was never an actual member. He would later make a video on the watchmen condemning their actions due to their enabling tactics [3]

Dillin once gifted Chris a shirt.[citation needed] During the Jail Saga, Chris had on the shirt as he was being arrested for incest. 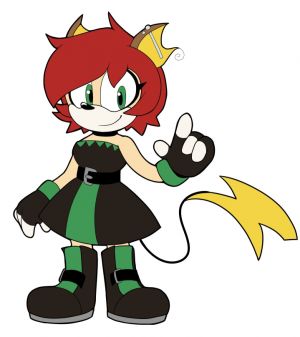 At some point prior to the Jail Saga, Chris and Taylor were to collaborate on designing an OC named Merlotchu, a job Taylor had been commissioned to do. With Chris jailed and unable to contribute, Taylor designed the character herself.[4]

On 30 July 2021, in the wake of the Incest Call being leaked, Dillin direct messaged Chris to ask of its legitimacy; while Chris at first attempted to drown him out in a paragraph of pseudo-religious nonsense, Chris being Chris eventually confessed to everything despite having no real reason to do so.[5] Afterwards Dillin leaked the conversation and earned the title of "minor traitor" by Chris.[6]

Dillin linked to a YouTube upload of the Incest Call.