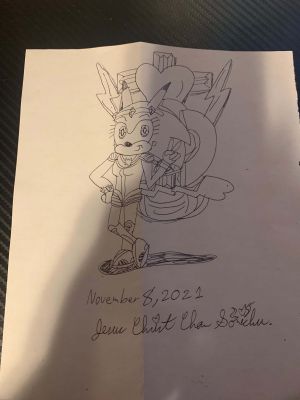 A drawing of Chris-chan Sonichu that Chris made in November 2021.

November was the eleventh month of 2021, and marked 14 years since the initial publication of Chris's ED page. Chris spent the entire month incarcerated; his second appearance in court was scheduled for this month but was given another continuance to February 2022.[1] Barbara was also involved in a serious automobile accident this month, suffering broken ribs and a concussion as a result of the incident, but still managing to survive the initial collision and be taken to a hospital. Aside from that, multiple private DMs and chatlogs made before Chris's arrest were leaked this month, and Chris wrote several more letters to fans, weens, and enablers.