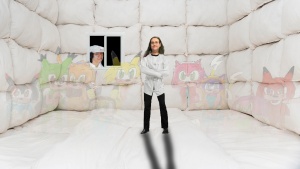 Chris has revealed that he has been sent to solitary confinement on at least one occasion.

In the letter, Chris claims that his body "has had Few emotional breakdowns" while imprisoned, but maintains that he now has "Higher Functioning Mentality, Emotions, and Spirituality" and has lost weight (most likely due to having a diet with less junk food in it and having to resort to exercise to alleviate his boredom).

Chris also claims that by "soul bonding" Barb, he was able to cleanse her of all of her sins with her, and makes it clear that this doesn't necessarily include sex. Though he also claims that had he not "bonded" with her, Barb would have died. He also states that if he is not found innocent, there will be a premature apocalypse.