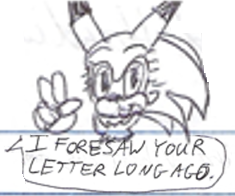 "I foresaw your letter long ago."

On 30 November 2021, Chris sent a letter from jail to an Onion Farms user named Celestia. In this letter, Chris discusses with her the concept of "self-religion", which she claims to practice. Following from this, Chris talks about his plans to take what he claims to have learned from the Bible, and implement them into his own convoluted belief system. Chris apparently empathizes with Celestia's "self-religion", and applauds her for following her own path. Chris also mentions how he copes in jail by talking to his imaginary friends.

In addition, Chris recommends book "Warhol/Chris Chan", even though in his Tweets it can be deduced that Chris cherry-picks and ignores parts of the book he likes and dislikes.

Chris also encourages "extensive letters", meaning that he wishes for much more to come in terms of letter circulation. Chris also mentions how he is limited to three sheets of paper at a time (six pages in total), which can partially explain the slow circulation of the letters, despite the considerable number of people who write to him. Chris also thinks that his handwriting is impossible to replicate, even when trolls have already proven their uncanny ability to replicate Chris’s work with the troll-made Sonichu 11.