From CWCki
(Redirected from Prayer)
Jump to navigation Jump to search 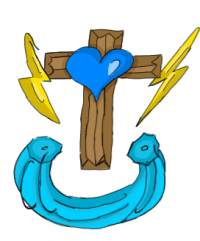 Neo Spiritual Christianity (spelled without a hyphen) is Chris's self-proclaimed term for his peculiar set of beliefs concerning reality and faith, developed while confined in jail after being exposed to the Bible, coined while he was incarcerated. It is essentially an accumulation of all of the many of the fantasies that Chris had been brainwashed into or had used as a means of coping along with other beliefs originating in Protestant Christianity, the New Age movement, Theosophy, and common superstitions found in the Western world.

In 2017, the Idea Guys have brainwashed Chris into beliefs of the Dimensional Merge, and have incorporated several elements from the video game Hyperdimension Neptunia into his fantasy world, particularly the idea that it was being ruled by CPU Goddesses.

These beliefs have been further spurred by many white knights and enablers, such as the Sons of the Miscreants and Praetor. The latter group as well as the Watchmen would enable various beliefs about Chris's status as a god.

Chris claims that there are multiple gods, goddesses and deities which manage all of the different dimensions.

The most powerful, and influential of these gods and deities is Emanuel (also spelled Emanuelle), likely named after a Hebrew name found in the Book of Isaiah as a sign that God will protect the House of David. Emanuel is responsible for the management of the multiverse along with its safety and wellbeing. The exact identity of Emanuel is hard to pinpoint, but Chris has stated that Emanuel is his godly mother, once father, having changed her gender and physicality to female over a century ago, while Barb was her "earthly mother". Chris has claimed that Barb is a reincarnation of Merlin the Wizard.

According to Chris, the world in which we live in is also inhabited by CPUs, which are the sons and daughters of Emanuel. The CPUs are the goddesses and gods who protect and govern the various universes that are part of the greater multiverse; some of these gods and goddesses are Neptune, Blanc, Noire, Vert, Uzume, along with Chris, the self-proclaimed CPU of our dimension. Chris claims to be Goddess CPU Blue Heart of the Commodore Consoles. All CPUs also supposedly live in the heaven realm, where three days on Earth are equal to four months there.

Chris as a Messiah

In Neo Spiritual Christianity, Chris is a reincarnation of Jesus Christ of Nazareth, complete with all of the memories from birth to his ascension to heaven.

Chris believes that he has lived many different lives before being born. He claims to have divided the Universe in 1389 after the legendary King Arthur ordered Merlin to exile all the dragons from his realm and was subsequently transported back and forth through time and space, flew through the chaotic rainbow's apex in 2003, and become reborn on February 24, 1982.

According to Chris, Emanuel planted an ovum from her ovary into Barb's ovary to attract him from his trip through time. He claims that all of the prayers to Jesus since his death were received by Emanuel and his divine body. His divine body allegedly forms the core of universe 1C-211987.

The Dimensional Merge (also known as Judgement Day or the Second Coming) is a supposed apocalyptic event in which Chris believes that "Dimension 1218" and "Dimension C-197" (read: the universe of real life, and the parallel universe where Sonichu, every person who has died, and every other fictional character lives) will combine into a new dimension titled 1C-211987, bringing fictional characters into reality, and in which Chris, being the designated liaison of the event, will ascend unto godhood.

Of course, the Merge is just an escapist fantasy and coping mechanism for Chris. Originally part of the lore the Idea Guys had brainwashed into Chris, the Dimensional Merge is Chris’s latest means of avoiding reality, believing that it will rescue him from his self-inflicted real-life problems and enable him to continue living like a child.

First announced in October 2018, the Merge was expected to take place by the end of the year. After that deadline–and several others predicted by Chris–passed without incident, Chris has remained persistent and claimed that he is unaware of the date of its occurrence. In the years since, indulging this belief has become the default latching-on point for would-be trolls.

Chris believes that the Dimensional Merge will include Chris as the second coming of Jesus Christ as the fully reawakened god and judge over a group of individuals that he refers to as the Toxic Minority. He claims that that he will descend to 14 Branchland Court (presumably from prison) during the second coming, where he will then personally complete the Dimensional Merge.

Chris claims that 18% of 1218-Earth's population (claimed by Chris to consist of 600 million individuals despite 18% of the current world population resulting in 1.43 billion) will be left to burn. Some selected buildings, statues, possessions, and artifacts will be relocated to 1C-211987, but remaining artifacts and the "Toxic Minority" will remain. 1218-Earth will subsequently be destroyed with nothing but pebbles left behind.

Signs of the Dimensional Merge

Chris has claimed that numerous events will occur prior to the Dimensional Merge as signs of the end of the world:

Chris claims that Jacob Sockness cursed the country of China with COVID-19 and the percentage of the population considered to be Toxic consequently increased dramatically because of the effects of isolation and quarantine. Chris claims that people who are still among the Toxic Minority prior to the Merge will receive various chances of redemption in the form of divine tests. One of these divine tests is simultaneously lockdown, which he claims to have been a test of faith, endurance and self-motivation administered by Christine and the other gods and goddeses. Chris claims that if COVID had not occurred, these tests would have came in the form of natural disasters and catastrophic events.

As stated above, Neo Spiritual Christianity is largely an admixture of essentially every religious or spiritual teaching that Chris has been exposed to and agrees with. However, this section aims to analyze the origins of each belief taught by Chris as part of his so-called religion.

According to Chris, his life is a retelling of the Bible. In Jail Letter - 3 October 2021, Chris claimed that the state of his life at the moment of writing the letter mirrored the third and fourth chapters of the Book of Malachi.

The New Age is an umbrella term referring to a variety of new religious movements and alternative spiritual practices originating in the Western world during the 1960s, whose practitioners are referred to as New Agers. These practices include various forms of prayer and meditation conducted along a multitude of cosmologies combined with various pseudosciences such as astrology and alternative medicine. New Age beliefs often encourage magical thinking, which only serve to reenforce Chris's beliefs in his supposed divinity. Unlike in most other religious denominations, New Age worship does not typically occur in organized, tax-exempt places of worship and instead takes place at home or within for-profit storefronts.

Chris has affirmed his belief in various forms of New Age practices in the past, all of which were syncretized with forms of Christianity and his own beliefs in the Dimensional Merge. Chris has performed tarot readings, believed in magic stones, and meditated in the hopes of achieving astral projection.

Theosophy is a minority religion founded in the 19th century. An adherent of Theosophy is known as a Theosophist and believers worship at Theosophical Societies. Adherents of Theosophy predominantly consist of converts to the faith, rather than multigenerational family-based groups.

Chris has been influenced by Theosophy in his affirmation of the Akashic Records, mentioned in various jail letters to fans. Owing to the religion's denial of free will, the Akashic Records are believed to be a flawless compendium of all thoughts, actions, and words spoken by all human beings in the past, present, and future. Theosophists believe that they can access the Akashic Records to "heal past wounds, lift pain and past issues, and find a higher expression for [their lives]."

The origin of Chris's belief in the existence of the Akashic Records is unknown. Several New Age religious groups incorporate some Thesophist belief and worship customs into their spirituality as Theosophy lacks a central faith authority and currently possesses multiple competing sects; this is a probable source of Chris's belief in certain elements of the religion. However, Chris appears to incorporate every spiritual or supernatural concept (regardless of whether it is intended to be religious or purely fictional) he finds into this bizarre pantheon of spirituality.

Chris has created several forms of worship and spiritual practices as part of his newly formed religion. So far, he has written new commandments and a prayer.

During his stay in Jail, Chris made up various commandments for his religion, which he disclosed on various jail letters. So far, Chris has made up 21 of these commandments, and only 13 of them are known. These new Ten Commandments serve in part as a statement of secular humanist beliefs, although Chris upholds the prohibition on blasphemy and the observance of the Sabbath.

The Lord Goddess Blue Heart's Prayer had appeared in some of the last letters that Chris would send from jail before his transfer from Central Virginia Regional Jail to an undisclosed location. Copies of the prayer were sent to Kenneth Engelhardt, Spamton, Bizarre Bazaar and possibly others.

All copies of the prayer are dated 13 January 2022, but Chris did not begin sending the prayers out until late January. Each prayer was sent along with a short personalized letter concerning the Merge and Chris's imminent release from jail.

Transcript of the Prayer

Chris had created a number of gifts for people who have sent pleasant letters to him in jail, made out of what would otherwise be trash. Two of these gifts were "Holy Labels", which recipients would place on their drink bottles to purify its contents, and "NSC Tokens".