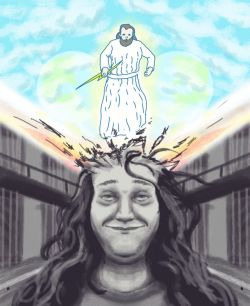 A messiah complex is the mental state of those who believe they are, or will become, saviors. Chris started demonstrating symptoms of this type of psychosis alongside his worsening narcissism and increase in maladapative coping mechanisms.

In the latter half of the 2010s Chris increasingly started resorting to his fantasy world as a way of coping with the pressures of reality and, after being influenced by the Idea Guys' cult-like grip, (who utilized a parody series about video game deities to manipulate Chris), he gradually built up a belief that these deities really existed in another dimension, and copied the lore about them to make up an imaginary counterpart of himself with their powers, CPU Blue Heart. Chris also attempted without success to orchestrate a Dimensional Merge to unite himself with said counterpart to gain an array of godlike powers, all as a maladaptive coping mechanism against his bleak life.

Following his arrest in August 2021 and subsequent internment, Chris' messiah complex turned literal. Possibly influenced by the bibles given to prisoners in jail, Chris began referring to himself as Jesus Christ and God,[3] even signing a letter as "Mrs. Jesus Christine Weston Chandler Sonichu, the Goddess Blue Heart and Lord of All."[4] Chris also refers to himself as "Real Player One" in his prison letters, which can be interpreted as a belief that he is the most important being in existence, if not a sign of full-blown albeit non-philosophical solipsism. Either way, it can be assumed that Chris views the majority of humankind as beneath him, although he most likely did well before going completely coo-coo.

Origin of the Messiah complex

Main articles: Chris and his ego#Narcissistic personality disorder and Chris and coping

Chris's messiah complex grew out of two already existing problems he had, namely his narcissism and his maladaptive coping mechanisms.

Since before his discovery, Chris believed he had magic powers; he used to curse people he didn't like (men) and bless people he liked (women). Due to trolls acting like these curses actually worked, Chris got the confirmation that some of his powers were real. He also thought God and Jesus had a special interest in his life and were appearing in his dreams to help him.

In his comics Chris gave himself god like powers to beat up the people he didn't like and change IRL situations where he was punished by authorities to a situation where he won against the authorities i.e, a Mary Sue. For a long time comic Chris and real Chris were separate individuals in Chris's mind, but with the coming of the Idea Guys and Teen Troon Squad the line between reality and fiction got blurred and he mixed himself and his self insert up.

As he had to prove to the fans that his newfound magic powers were real, he came up with the most rational solution he could think of; the dimensional merge. This helped blow his messiah complex out of proportion.

The Merge is a concept where two dimensions, one where Chris is a loser and another where he is a god are merging where the end result is a single Chris with godlike powers. The Idea Guys created the concept of the merge and Chris immediately believed it because it provided an explanation as to why his powers are being activated after 36 years of his miserable existence.

This was most likely created as a means of coping from his life where he was the man of the house and had to take care of his mother, pay bills and do tasks he considers to be stressful. He also uses the merge to justify why he does nothing daily and to give himself hope that things might get better in the future.

To stroke his ego and get confirmation that his godlike powers are being activated, he made his fictional characters worship him, for him these characters are living and their worship is equivalent to worship by actual people. Seeing this, many enablers also started worshipping him and created a religion based on him to get on his good side. Due to all this reaffirmation in his believes he started thinking he is a god. 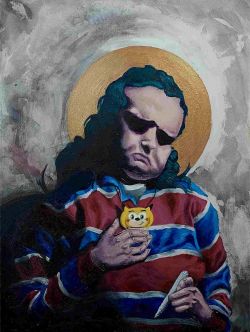 Jesus Christine Chandler giving her heart out to everyone.

In the wake of Chris being arrested and incarcerated on a charge of incest, awaiting legal proceedings, viewers watched with bated breath in anticipation of what would happen next. Many thought that time in jail would serve to humble Chris, imparting unto him an inescapable awareness of his wrongdoing and forcing him to understand that actions had consequences. For over a month, there was near-total radio silence, and for a time, people believed that perhaps Chris had finally had a reckoning in being forced to face reality.

On September 19th, 2021, these notions were swiftly put to rest.

While not the first jail letter written by Chris, that being a brief plea for money in August shortly after his incarceration, the message sent on September 19th was wildly different in both tone and content. Reading more like a sermon than a cry for help, Chris declared himself a reincarnation of Jesus of Nazareth as he defended his actions and fulminated against those who had betrayed him, having come to view himself as the single most important being in existence, christening himself as 'the real Player One' - the effective center of the entire universe. Many of the messages that followed, sent to assorted acquaintances, old friends and Youtube channel owners, among others, served to demonstrate the scope of his new outlook. Chris would use letters to elaborate on his feelings towards others or provide lore for his confusing self-made pantheon, all the while assuring his readers of his godly status and insisting vehemently that the Dimensional Merge was coming ever closer, nearing completion by his hands - and insisting with equal vehemence that his actions towards Barb were not criminal, but an act of 'soul-bonding' designed to protect her and prolong her life. Chris' belief in his own godhood became such that he eventually convinced himself that he would simply be released from jail without consequence to tend to his duties following the completion of the Merge, a belief he held to right up until his last known communique prior to his transfer.

How this dramatic change in his mindset occurred is uncertain, though it is commonly believed that combined with Chris' existing fascination with the Dimensional Merge and an inability to cope with the consequences of his actions, Chris' voracious readings of the Bible in isolation have served to instill within him a deeply religious fervor, driving him to create a nonsensical mythology that he has since used as yet another coping mechanism, one that threatens to completely destroy what tenuous ties to reality he still has left.

Examples of the Messiah complex