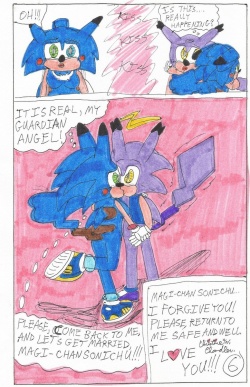 The reason Chris identifies as bisexual.

Bisexuality is the sexual attraction to both men and women. For most of Chris’s life, he identified as heterosexual, attracted only to women, and he later switched that to lesbian after coming out as transgender. In April 2018, the Idea Guys manipulated Chris into believing himself to be bisexual by brainwashing him into thinking he was in a polyamorous marriage with the fictional male character Magi-Chan.

For most of his life, Chris had identified as straight, attracted to women while feeling repulsion towards other men whether straight or gay. The roots of his intense dislike of men can be traced to the severity of his autism - Chris had a strange perspective on sexuality, viewing it as requiring continuous maintenance (noted by usage of the term "falling off the straight path" and using magical thinking in the form of the Sailor Moon Poster to stay straight) and being corruptible simply if another person utters a word for genitals. The Man in the Pickle Suit described how Chris perceived the matter:

Some fans speculated that, based on his homophobia and his usage of methods to stay straight, Chris might have been in the closet instead. However, the theory is inconsistent with the rest of Chris's personality. Gay people keep to the closet from social pressure, but due to his autism, Chris has difficulty discerning and conforming to social pressure. Chris is also the type to do as he wants and justify it as feeling right to him regardless of social stigma, such as with going transgender, resisting the pressure from his parents to stop – which didn't manifest with bisexuality.

At any rate, as Chris got older, and from osmosis from the SLGBTQ community he joined after identifying as a transgender lesbian, he began to mellow out on some of the beliefs he had held in his 20s, relaxing his hardline stances against straight and gay men.

A key technique the Idea Guys used to manipulate Chris's beliefs was posing as fictional characters in Chris's escapist fantasy land, CWCville. Examples include posing as Cryzel to pressure Chris into complying with their demands,[5] posing as Magi-Chan to inform Chris to draw himself raping Sonichu to ensure Crystal's birth,[6] and even posing as CWCville Chris to trick Chris into thinking CWCville Chris is a Satanist.[7] 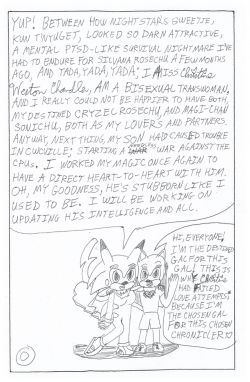 Page from the Idea Guys-directed Sonichu #13 on Chris coming out as bisexual because of the delusions they had fed him.

The Idea Guys then began to brainwash Chris over his sexual identity. They told Chris about his supposed sexual partners:

On 26 March 2018, the Idea Guys led Chris to believe he was in a polyamorous marriage with imaginary friends Cryzel and Magi-Chan.[9] From Chris's perspective, the characters were as real as him – just located in another dimension.

The Idea Guys then "screeched at Chris to say he was part gay", according to a Guard Dog who later viewed the chat logs.[2] Two weeks later, on 10 April 2018, Chris relented to the psychological manipulation and publicly declared himself to be bisexual, stating he had "realized" it with his "sweethearts".[1] The Idea Guys had Chris include a story of the coming out and marriage in Sonichu #13.

Having been convinced he was bisexual, Chris began to act out his newfound sexual identity – even in ways that surprised the Idea Guys, and lasting well after the Guard Dogs removed them from power.

Chris updated his Facebook to note that he is a bisexual transwoman, "interested in men and women".[11] Chris also got over his long-held psychological dislike of shirtless men and pickles, buying a Pickle Rick toy in June 2018 and placing it in his bedroom.

In April 2018, Chris wrote a gay poem on Bryanfrogboy, calling him sexy. In May, when male fans Copitz and his friend visited Chris at 14 Branchland Court, Chris greeted them with "Great Big Kisses (on the CHEEK)".[12] Chris also drew a "thank you" drawing for Null in which Chris says to Null, "Oh! My goodness!!! You are sooo handsome and cute!!!".[13] In June, Chris kissed men on the cheek at TooManyGames (leading to his ban from there). In December, Chris still believed he was bisexual:

In July 2019, Jacob Sockness, a gay man, self-described worshipper of Chris and an enabler of Chris's delusions, started communicating with Chris and began designs to manipulate him into a sexual relationship. In the Sockness impersonates Magi-Chan chatlog, Sockness borrowed a page from the Idea Guys' playbook and role-played as Magi-Chan in order to dangle the Dimensional Merge over Chris's head and threaten that it won't go forward unless he and Chris meet. Sockness also had Magi-Chan state that adding Sockness to the polyamorous marriage would be a good idea, which Chris believed to be legitimate feedback from Magi-Chan. By October 2019, Chris was more open to the idea of a relationship with Sockness, saying "we can kiss at the future time".[15] However, due to intervention by the Watchmen, who countered Sockness's role-paying with their own, Chris was led away from Sockness and eventually dropped contact with him.[16] But Sockness managed to make a return, and in July 2020 when asked whether he is dating Sockness, Chris replied "No, at least not yet".[17]

With the exception of the manipulator Jacob Sockness, Chris has yet to attempt pursuing a relationship with a man, suggesting that he is only bisexual for his imaginary friends.

When Chris's sex drive made an intense resurgence in 2021, he expressed a desire to be in a relationship with multiple female members of the Watchmen and Praetor groups. Notably, despite the groups also having men, Chris exclusively listed female members only.[19] Furthermore, he eventually turned to an affair with his mother.