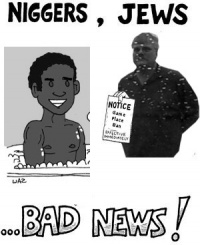 Operation BARBarossa was a plan, devised by the Idea Guys and implemented by a bullied, manipulated Chris on 14 November 2017, to combat the enemy forces of Gamindustri, after Silvana was allegedly taken hostage by Akan.[1] Actions included praying to the Gamindustri goddesses, playing the Hyperdimension Neptunia games and watching their anime, and dancing to Serbian nationalist music. Obviously, the event's name and contents had absolutely nothing at all to do with the German invasion of Russia in 1941, but was chosen in honor of Chris's mother.

Chris is not generally known for his expertise with black comedy, nor for his knowledge of history or government. His independent knowledge of the Nazis before and during all this was limited to that they were bad, and their emblem was the four-boomerang-shaped symbol. The jokes about prison camps, showers, ovens and dentists, which would be obvious to any American of his age who did not sleep through history class, went over his head entirely. However, the messages's writing style indicated that he was writing the bulk of them himself, rather than simply posting material written for him by someone else.

The sheer volume and density of atrocity jokes in Chris's posts were clearly intentional on someone's part, and were one of the first obvious clues pointing to the fact that Chris's naïveté was being exploited by trolls, who had gotten into Chris's "inner circle" and whom he trusted enough that he would not even bother with a basic internet search for the terms he is using. It would not be until January 2018, though, that the Idea Guys would begin to be unmasked, and months after that before the full scope of their damage was known.

On 15 November, Chris made a post claiming the operation had been a success, seeing Silvana's safe return, along with a peace treaty being made with Count Graduon, acquiring his troops and services. Prison camps to turn enemies into allies were made on the outskirts of Cwcville, which was, according to Chris, "full of large ovens to keep the people warm, and even top-notch dentistry with well trained doctors also running the clinic. The camps also have some of the best showers a prisoner can ask for; Shower Stalls with privacy walls."[2]

Chris doesn't realize he is following the footsteps of many tyrants

On 16 November 2017, Chris made new posts on Twitter letting everyone know the names of his new prison camps. Almost all of the names can be matched to real prisons or concentration camps within history:

On 29 November 2017, Chris finally acknowledged his strange choice of names by claiming that Count Graduon had written the posts himself, not Chris: