Chris's ideas about his ancestry and lineage unsurprisingly differ greatly from what is known to be true.

This Chandler Family Tree includes pets and people Chris imagines to be related to him: 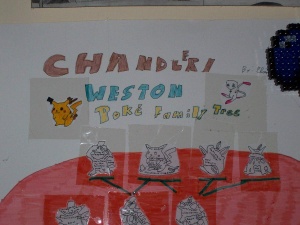 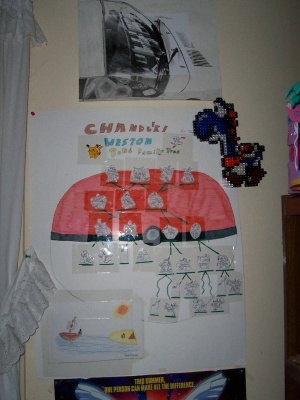 Chris naturally drew his family tree in the form of Pokémon. He gives pilgrim hats to those on the Weston side and feathered headdresses to those on the Chandler side, both in reference to the extremely dubious tales of Chris's heritage.

Below is a transcription with the format Name / Date of Birth / Description / Culture and Pokemon.

Basic ancestry of Chris is depicted in this tree.

A full-sized family tree going back many generations can be viewed here[1][2][3][4].

Although there is no evidence that his mother's ancestors were on board the Mayflower, Chris's paternal ancestors were among the first settlers of his home state of Virginia. Chris's direct male ancestor John Chandler (c. 1600-1657) was an early settler of Jamestown, Virginia, arriving in 1610, ten years before the Mayflower.[5] John married the widow Elizabeth Lupo (née Bassano), a member of the illustrious Bassano family of musicians who had been recruited from Venice by King Henry III to serve in his court (some have claimed that the Bassanos were of Jewish origin, but the jury is out). The Chandler family migrated southward over the generations, passing through North Carolina and Georgia before settling in Alabama, Bob's home state.

Barbara's maternal grandfather Robert Pettis Wynn was allegedly a two-timing drunk and moonshiner who "failed to provide even the most basic support for his wife and children".[8]

In January 2017, a distant relative of Chris posted images to Kiwi Farms, on various documents relating to the Chandler family, acquired from Ancestry.com[9]

When asked to clarify Chris's British connection, the relative states that he or she is an immigrant from what is now Northern Ireland:

Given the chronology, Chris's great-great-grandparent may have emigrated as a result of the Irish Potato Famine of 1845-52.

Despite the purported French Canadian connection, none of Chris's great-grandparents or great-great-grandparents shown in the family tree have French surnames. Chris has, however, claimed to be of French descent on his mother's side.[10][11]