In reality, dimensions are not parallel universes, but rather directions you can move in within a universe. Our current reality contains three dimensions of space (length, width, height/depth) and one dimension of time, though recent studies into relativity and quantum physics may suggest the presence of extra time dimensions. Dimensions are also relative to the observer, and speaking of the "third dimension" is like looking at a water bottle and asking "which ounce is the 3rd ounce." Comic book physics ≠ real life physics. 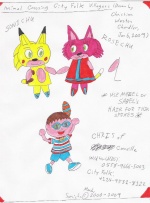 According to Chris, 1218 was inhabited by fantastical denizens alongside humans and animals but was divided into other universes by the wizard Merlin during the reign of King Arthur in the 14th century.[12] This is Chris's way of explaining why mythical creatures do not coexist with us today. 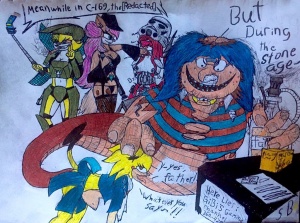 ZX-49, also known as "The Macbook Pro Dimension" is the home-dimension of all of the OC's created by AquaDiamond8. Kylechu is from this dimension.[17]

Chris also noted that the dimension has "fallen" and that Kylechu is one of its survivors.[17]

The home dimension of cartoons such as Teen Titans Go, Pony Life, and other similarly-styled cartoons[18].

The only major difference between this dimension (1218) and 1214 is that Michael Jackson lived a few more years and put out two more albums, talking about old age and the feeling of veering on death and not wanting to be old while feeling young. He still OD’d at his time of death. "Ride or Die" is one of the 1214 Jackson's songs. The Chris from dimension 1214 has, for a time in mid 2020, possessed 1218 Chris's body, so that Chris wouldn't have to pretend to be Sonichu.[19]

C-194 is the sister dimension to 1214. The Chris who was travelling between these two dimensions was slain during escaped from the war between Neo Milwaukee and Cwcville, after C-194's Chris conducted the Soda Rain Holocaust. This all happened in the alpha timeline, though, not our one, which is the omega timeline.[20]

Sonic.exe was a popular creepypasta which featured a hellish pocket dimension inhabited by a eldritch/demonic version of Sonic. Although logically it would have made ideal trolling fuel since 2011 (the year Sonic.exe was written). Chris isn't known to have mentioned it until November 2020, when he replied to a tweet on a Sonic.exe animation, commenting he had watched it and found it both haunting and inspiring.[21] Chris again mentioned the eldritch OC from Sonic.exe in January 2021 as part of his extended fantasy over spirit possession.[22] The idea of such a dimension terrifies Chris and he apparently spent some time using his goddess powers stopping entities from invading the multiverse as stated in Jail Letter - 9 May 2022.

Named after a Transformers franchise featuring evil Autobots and heroic Decepticons,[23] it predictably houses evil counterparts of protagonists and possibly heroic antagonists as well as an evil counterpart of Chris, who is still male and is permanently stuck in his Sonichu form. Their invasion of St. Canard and Florida was the subject of several jail arts.