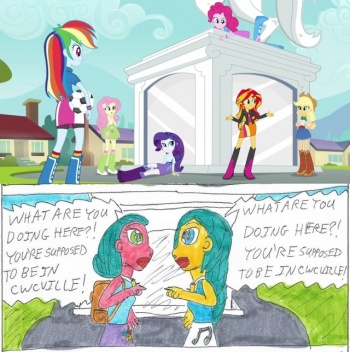 Not content with just selling exaggerated horses, Equestria Girls is Hasbro's foothold in selling fashion dolls in their My Little Pony franchise. The franchise made its debut in 2013, with the release of the movie of the same name. The film establishes that a human world exists parallel to the pony world of Equestria, where most of the characters are teenagers who attend Canterlot High School; nonetheless, the magical and friendship aspects synonymous with the parent franchise are still present.

For Chris, the sterilized high school setting most certainly aligns with the idealized Manchester High School days which he so fondly looks back upon. At Manchester High School, Chris had several gal pals, was the water boy/"manager" of the basketball team, and created the OCs, Bionic and Sonichu – the latter of whom would go on to define his life, moving forward.

In the beginning, when My Little Pony announced their first EG movie, Chris was not keen on the concept – worrying that it would attract "High School Pedofile Perverts":

Later, at BronyCon 2019, Chris would ask creator Lauren Faust whether she had planned to use G1 character Megan before EG was conceived.

However, by August 2013, Chris was elated with the new high school fantasy drama and had placed it at number 2 in his "Top Movies List" (after Mary Poppins, naturally):[4][5]

In October 2013, Chris remained fond of the movie. Thus, he was partly inspired to create his Lego Manchester High School (as seen in the video, Chris shows off his new Blu-ray copy). No doubt, Chris further retreated into the franchise, when he discovered that his high school gal pals did not consider him a genuine friend, and only interacted with him, as per an arrangement through his father.[6]

The next year, Chris purchased an Equestria Girls toy set which came paired with Vinyl Scratch glasses. He would be seen on multiple occasions sporting the glasses, including Cville Pride 2014, his endeavor to fix a fictional character's blue arms, and OmegaCon 2015 cosplaying as Vinyl. 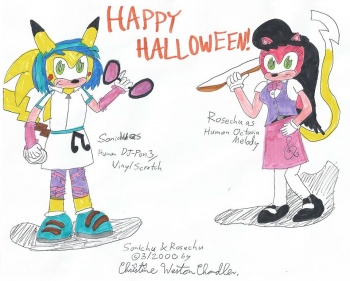 On Halloween 2015, Chris shared drawings of his Electric Hedgehog Pokémon family wearing costumes based on the franchise, including Sonichu and Rosechu dressed up as fandom-shipped Vinyl Scratch and Octavia, respectively. After BronyCon 2019, Chris adapted the drawings for his Twilight Sparkle's Secret Shipfic Folder trading cards – adding them to the Sonichu lore as the family's 2017 Halloween costumes.

In 2016, Chris purchased at least three Equestria Girls "Minis" figurines, which he used to create the Christine Doll – a custom doll which served as his first EG avatar. Chris regularly carried the doll out in public, especially at Cville Pride 2016 where he posed it in an intimate encounter with a Vinyl Scratch doll.

2017 was a paramount year for Chris' relationship with My Little Pony: Aside from creating Night Star and attending BronyCon 2017, Chris commenced his work on Sonichu #12-9. In the September, Chris created EG reference drawings for his ponysona and the OC created for his newest sweetheart: 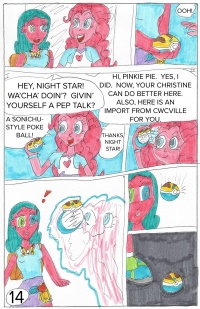 In Sonichu #12-9, Night Star hops through a portal from CWCville to Canterlot High School, where she bumps into Comic Chris. Upon receiving a cutie mark from Star, the "prototypical friend" transforms into a near identical copy of her pony counterpart, and is thrust into "mental sync".

Across the campus, Diamond Melody is chatting with Vinyl Scratch and another friend. Night Star guides her CWCville counterpart to Melody, as she once had a relationship with the pony version of Melody. The Comic Chris story arc ends with her being invited out to the cafe after school.

Meanwhile, Night Star is approached by Pinkie Pie, who accepts Star's gift of an S-Chu Ball. Inspecting the ball, Pinkie is captured by the ball—despite not being a Pokémon in any shape or form—and proceeds to roll to her art class like a hamster.

The Equestria Girls portion of the comic ends with Night Star delivering ingredients to Sunset Shimmer, who is revealed to be working on a "permanent hair colour dye solution".