There is no franchise that Sonichu will not defile. 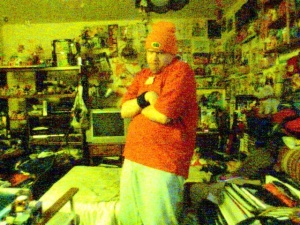 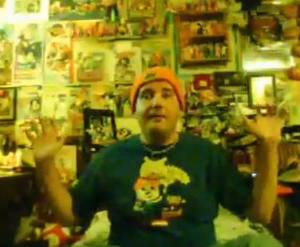 Chris is a big fan.

PaRappa the Rapper is a video game about a rapping dog named PaRappa ("Parapper the Rapper" or "Parappatherapingdog" according to Chris) that has appeared on almost all Sony consoles. The original version, for the first PlayStation, was one of the first popular rhythm action games, played by tapping a set of buttons in sequence along with visual cues and music. The game is also known for its distinctive art style, in which the characters appear to be made of paper.

In 2007, Chris entered a contest called Chop Chop Master Onion's Rap Showdown, put on by Sony to promote a new PaRappa game. Chris wanted to win in order to take Megan Schroeder to Seattle and finally score with her. He failed because of Adam Stackhouse's accidental trolling and became very angry.

Characters from the PaRappa games have not appeared in Chris's comic to date (although the beanie does,) but in 2009 Chris wore a PaRappa hat in rounds 2 and 5 of SingStar Challenge, as well as a PaRappa shirt (saying "I gotta believe!") in the Over 50 Pounds video. The hat would appear in Sonichu 10, when Sonichu himself dons it. It apparently causes the wearer to turn paper-thin upon donning it, and Sonichu says, "I gotta believe!" right before the performance of Revive Zordon.

Chris's obsession with music games such as Guitar Hero can likely be attributed to PaRappa, as he mentioned it extensively in his PS3 History Level alongside PaRappa's guitar-based spin-off UmJammer Lammy.