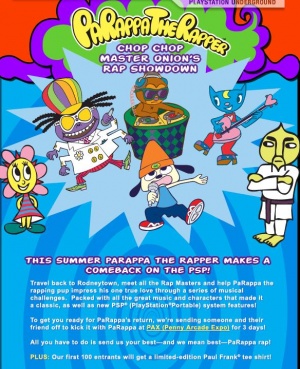 Original promo info about the contest

In June 2007, Sony Computer Entertainment America (SCEA) announced the Chop Chop Master Onion's Rap Showdown contest to promote the video game PaRappa the Rapper. Contestants were to film themselves performing either Chop Chop Master Onion's rap, Instructor Mooselini's rap or Cheap Cheap the Cooking Chicken's rap a capella. The grand prize winner of the contest would receive two PSPs and an all-expenses-paid trip to Seattle for the 2007 Penny Arcade Expo.

The contest was of monumental importance, as it would achieve goals for Christian Weston Chandler on multiple fronts. Beyond his innate desire to win contests by making an ass of himself on film, Chris hoped to bestow one of the PSPs to his beloved Megan Schroeder and invite her to accompany him on the trip, thereby creating an opportunity for her to give in to her obvious passion for him. The potential benefits could not be overstated. Failure to win the contest was not an option.

To ensure nothing less than total victory, Chris elected to perform the "Chop Chop Master Onion Rap". Despite claiming this was the only song he knew from the game, Chris clearly didn't know it all that well, considering that he reads its lyrics while "performing," not having bothered to rehearse/learn the lines. But then again, have any of his videos looked even remotely prepared? Oddly, he peppers the video with various video effects that seem to come from the PSEye program EyeCreate, including a hilarious caption of "Birthday Boy" popping up during when Chris first does the "duck and turn" part of the song. It could be assumed that Chris did so to make his video look 'nice', but in the end it made it turn into laughing material. Towards the end of the video, Chris can be seen struggling to breathe from close to three minutes of extremely mild exercise. Also, at one point, a fire effect is shown at the bottom of the screen. Make of that what you will.

Hey, P-Station, my name is Christian Chandler
I live in Ruckersville, Virginia!
I have a PSP, I like to rap,
I play PaRappa, and go with him now.
The only song I know is "Master Onion"
Which I got from a demo I borrowed from my friend Megan!

I have a PSP and she don't,
So give me the PSP; unwrap the wrapper,
So I can give one to her, and then we can play together!

Kick! Punch! It's all in the m-mind.
If you wanna test me, I'm sure you will find
That you all things, I'll teach ya sure to beat ya,
Nevertheless, you'll get a lesson from teacher now

Don't get cocky, it's doesn't get rocky,
We gonna move down to the next ya jockey now

Hmm, yeah, I see you're getting better,
Kick to the limit in order to get her now

Come on now, why don't you follow my words,
Because we're almost done, I'll make things worse.
I wanna see if you wanna see what it means
To be the man with the master plan. Are you the man now?

That's it for today.
Good job, PaRappa!
You can go to the next stage now.
Yahoo! Alright!

PaRappa, I'm so proud of you!
Congratulations!
Alright. Thank ya, teacha!
Again: what?

Man, you’re so good!
I got a tit-loose memory, money
With students like you…
Wanna try a super-beginner’s course?

You’re pick—you’re pickin’ on me too fast!
I'm outta here!

Guitar Hero on PlayStation 3
Don't press the PS button after select hang, see?
Make sure you hook up with the converter controller
Dude, rock on, yo! Nananananaaaa! 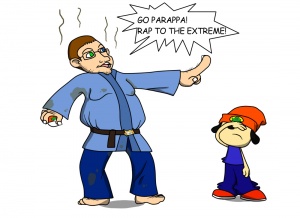 Chris's video made it into the top 10, giving him just a small amount of luck as the contest was rather obscure (at the time) and a little more than 10 people entered. The winner was to be selected from a vote by PlayStation Underground members in July 2007. Chris asked for votes from many people:

Chris also took matters into his own hands by stuffing the ballot with an endless stream of votes on different fake accounts. On the day before voting ended, he posted his own reviews of the top 10 videos in his PSN blog. 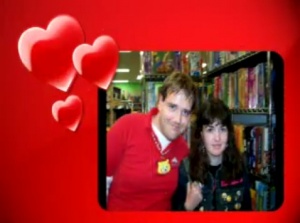 Chris thought that he could easily win the contest and the heart of his Sweetest Megan. Chris was, unsurprisingly, wrong.

The competition was won by Adam Stackhouse. Being the narcissist manchild he is, Chris has bore a grudge against him for a long time, as he felt Adam broke "da rules"[6] by having music and multiple people in his entry. Chris loathed the 2nd and 3rd place winners for having music as well. In actuality, the beatboxing in Adam's video is technically a cappella. Furthermore, another top 10 finalist claimed that he had removed his own music to avoid breaking the rules, but Sony said it was fine.[7]

Chris, of course, violated the rules to a far worse extent than Adam - inserting his own lyrics, to say nothing of rampant vote-stuffing. How Chris even made the top 10 is a mystery; the judges likely observed the obvious fact that something is wrong with Chris and took pity on him.

Relentless vote stuffing did earn Chris a reward, however. The rules state that finalists would "...get their Submissions published on PlayStation.com, and will receive a copy of the game PaRappa the Rapper for the PSP® (PlayStation®Portable) system and some PaRappa branded premium items such as a PSP skin, PSP charm, and a PaRappa signature beanie (ARV $60)." Or, as Chris explains in PS3 History level, "copy of the PSP version of the PSOne classic, a charm, HIS hat, and 5 PSP-1000 Skins." (It is unknown why "HIS" is all capitalized. PaRappa is neither divine in nature, nor exactly a paragon of masculinity.)

Infuriated over his loss, Chris sent an angry email to Sony executives on 3 August 2007, blasting them for refusing to award him the Seattle trip.

The email is a whiny and rambling tirade where Chris begs for first prize, because winning the video game contest represented his only opportunity at losing his virgin with rage status to Megan Schroeder and giving birth to his daughter Crystal. Furthermore, Chris accuses the company of discriminating against autistic individuals, solely for failing to reward them with special treatment:[8]

On 4 August, Chris raged multiple times on his PSN blog against Adam and the other winners, using his time-honored "Kick the Autistic" crutch. When people told him to relax, he told them to shut up: this resulted in a temporary ban from PSN moderators.

The same day, Chris sent another angry e-mail to Sony executives, this time enclosing a systematic dissection of why everyone else's video was in violation of contest rules. Chris evidently overlooked his own questionable ethics of mercilessly vote-stuffing with sockpuppet accounts and begging everyone on his e-mail contact list to vote for him. Sony later replied with a canned response, indicating that his letter was not even read at all and that Chris would need to resort to more drastic measures.

Two days later, Chris would continue his rampage against Adam Stackhouse by creating a fake webpage designed to show himself as the true winner of the contest. That page substituted his own name for Stackhouse's and also included the following disclaimer:

He then went around various PSN News posts and left comments with the following:[9][10]

Chris later escalated his campaign by producing a video titled CWC is Angry. In the video, Chris prints out a picture of Stackhouse and his sister and uses it as a pellet gun target for two continuous minutes. Although the video was originally intended to be a vindictive show of intimidation, the mood was spoiled by an episode of Aqua Teen Hunger Force blaring loudly in the background, not to mention Chris' weapon of choice was a toy Transformer.

During Chris's struggle to be recognized as the rightful winner of the contest, Megan informed him that she was glad he lost because she had no interest in going on a trip alone with him, given his hands-on approach to their relationship. Whether or not she would have accompanied him, she was upset by his in-person interactions with her. The way Chris treated Adam and his sister after they won probably did not help matters either. Chris finally went on to claim that he had contracted a "gut virus" due to the strain on his body from slapping together his half-assed contest entry. From that point onwards, Megan's e-mail correspondence with Chris became much less frequent and a little cooler in tone, indicating that while ShecameforCWC.JPG may have been the final nail in the coffin for their friendship, the fall-out from this contest was the first nail in that coffin.

Two versions of the video exist. The one that Chris uploaded later to his YouTube channel has an additional photograph of Megan between the first and second verses. This version is most likely the original version before Megan broke off contact with Chris, as is evidenced by an angry email she sent him after returning from her Kentucky trip.[11]

On 31 October, Chris made a fake Parappa profile on MySpace to ease his pain from losing the contest--Parappatherapingdog. Good job.[12]