From CWCki
(Redirected from Transformer)
Jump to navigation Jump to search 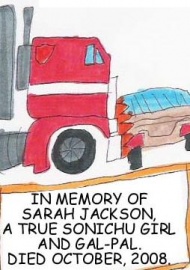 Transformers are robots in disguise which are more than meets the eye, first introduced in 1984 by Hasbro. Chris has been fascinated with the Transformers since he was young, and even well into adulthood invests his Transformers toys with great significance. Transformers have become a major presence in his comics.

Chris began selling off his Transformers figures in April 2018[1], due to the Financhu Crisis putting into jeopardy whether he would be able to attend the 2018 BronyCon[2].

While Chris isn't a dedicated collector, the jumbled mass of crap that fills his room includes several Transformers toys. Of particular note is his Optimus Prime toy, which he has often used as a sort of totem to reinforce his heterosexuality. When Clyde Cash forced him to "admit" that he was gay, Chris held his Prime toy tightly throughout the video in question, which he later explained was a way of asserting his straightness in spite of his words.

In Christian Weston Chandler's FUTURE MESSAGE, Chris compares his Transformers and My Little Pony figurines as ways of studying the traits of the opposite gender and using them as roleplay models. It's possible that Chris really does practice what he preaches, and might pick Transformers and My Little Pony toys as comforting remnants of his (actual) childhood from the '80s and '90s.

Some of Chris's favorite popular music comes from the soundtrack to the animated movie The Transformers: The Movie. He once recorded a video of himself singing Stan Bush's "Dare", and downloaded a number of other songs from the soundtrack – like "Dare to Be Stupid" by "Weird Al" Yankovic – from Rhapsody.com. "The Touch" was also Chris's choice of song for round 4 of the SingStar Challenge against Liquid Chris. He lost. Chris also plagiarized one of Megatron's lines from the movie ("I would have waited an eternity for this – it's over, Prime!") during the battle with Reldnahc in issue ten. In fact, the scenes in both cases are extremely similar – the hero is downed and evidently defeated, before performing one last defiant attack against the villain as they stand over them. Chris fills the role of Optimus Prime and Reldnach is Megatron – further evidence of Chris's self-identification with Optimus.

While they were not originally part of the Sonichu oeuvre, Transformers slowly crept into the spotlight. Bagget's "Change-Bot" Crackder was the first to join the series, in Sub-Episode 7 of Sonichu #4. Later on Sonichu #9 would introduce a flood of new Transformers, including Punchy's motorcycle Prower, the comic version of Chris's car Son-Chu, the Jerkop Punislav, and Armoraxe.

In the comics, the Transformers are divided into the Samurai Pizza Bots, the unfortunately named defenders of CWCville, and the Decepti-Clones, a much larger army under the control of the Private Villa of Corrupted Citizens. The Decepticons working for PVCC come in three variants and are all mass produced. They attack the city with Mary Lee Walsh's Jerkop army in Sonichu #9 and are completely wiped out during the course of the battle.[3] The Autobots are far less numerous, only numbering five members, but are evidently much more powerful than their counterparts, as while the entire Decepti-Clone army is destroyed during the Battle of CWCville, the Autobots do not lose a single member.

For reasons that remain difficult to determine, Chris chose to depict the 18-wheeler that killed Sarah Jackson with Optimus Prime's distinctive red and silver paint job. Either Chris intentionally drew a Transformer crushing his would-be sweetheart, or (more likely) the image just bubbled up out of his infamously limited imagination.

Sonichu Special 4 features Chris shooting his rival CChanSonichuCWC with what looks very much like an early Megatron toy. The real-life version also appears in some of Chris's videos. In CWC is Angry he shot at a picture of Adam Stackhouse with the mock pistol, while in the War Paint Video he used it to threaten all of his general enemies.

On numerous occasions within the 2016 election period, Chris has used the Transformers Titans Return Voyager Class Sentinel Prime toy as a physical representation of Donald J. Trump to beat on and smash. He states he uses the toy as an effigy due to its primary color being orange, akin to Trump's skin tone.[4] Curiously, the character was used in recent comics as an analog to Trump – his primary motivation as a villain was to purge the populace of Cybertron of new arrivals and restore it to its former glory. The topic has been joked about heavily among fans, but it's unclear if Chris is aware of this. Given the release of this toy during the Financhu Crisis, it shows that Chris is still incapable of being fiscally responsible.