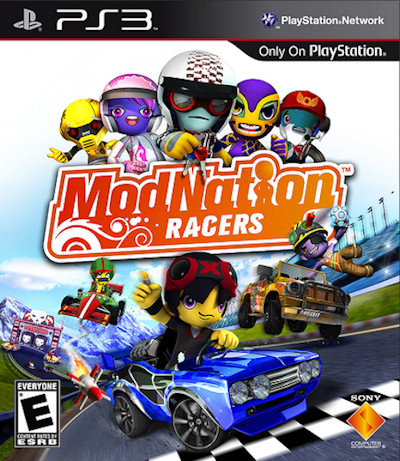 ModNation Racers is a customizable kart-racing game for the PlayStation 3, PlayStation Portable, and PlayStation Vita that Chris took a liking to. It wasn't quite 2010's answer to LittleBigPlanet, but it was close.

In addition to providing gamers with simple gameplay used in kart racers and cute, gaily-colored characters found in many other games, ModNation Racers is heavily based around user-generated content, much like LittleBigPlanet. Chris could now foist his questionable design skills upon the world through a kart-racing game.

Sony shut the game's servers down in October 2018.

How Modnation looks in Chris's mind.

When only the beta version of the game was available, Chris posted 25 screencaps of his avatar driving a yellow, Sonichu-themed cart around an empty racetrack on the CWCipedia. These were filed under "Original CWC Art". Later, after the retail version arrived, he created a number of characters and cars (images are available below), as well as a CWCville track.

The "Details" section of his profile page read:

It was of great concern to Chris that despite his belief that he had a large fanbase, barely anybody bothered to download his poorly-designed track, and he whored it out at every opportunity. On 17 July 2010, Chris updated his Twitter account for the first time in ages, begging his imaginary followers to give him codes for the "Mystery Mods" (promotional DLC packs included with the pre-ordered copies of the game[1]), and to download his CWCville track so that he could acquire more trophies. 26 July saw yet another Twitter update whining for downloads and positive reviews.

He also posted multiple threads on the forums at GameFAQs and GameSpot making similar demands. When his initial beg-a-thons were deleted because of those boards' anti-soliciting policies, Chris, being Chris, just went ahead and posted them again.

Despite having all the free time in the world to practice his skills, Chris remained mediocre at ModNation Racers. This should come as little surprise. After racing in 1,600+ contests, Chris has won less than a quarter of these (with almost 100 "Disconnected" and "Did Not Finishes," indicating some tard-rage present).

Additionally, a number of his characters show they have been used in 0 races even days after their creation, meaning even Chris didn't even bother to use his own creations. 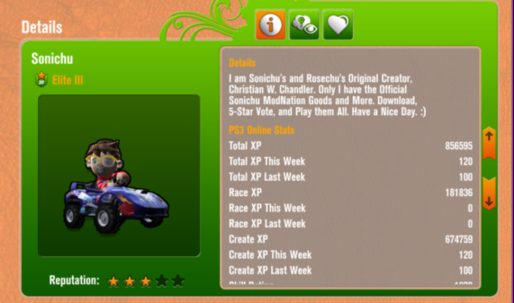 Chris made several posts in the MNR forums in 2011-12. Most notable was his claim to be "famous online" in a bid to get downloads for his PlayStation Vita mods.[2]

Re: Mod and Kart of the week submission for ModNation Monday Blogs

Re: Mod Postcards: Show Us What You've Got [ Edited ]