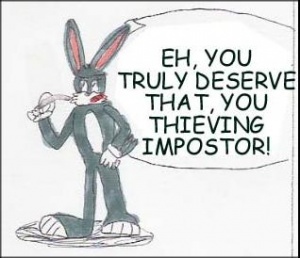 Yeah, doc, how dare you use other people's characters without their permission?

One of the hallmarks of the Sonichu series is its frequent use of guest appearances by fictional characters from other properties. The following is a list of these characters.

Note that this list is not intended to include any of the following:

SEGA mascot and a major example of copyright infringement in the comic (aside from Sonichu). He makes a few appearances in the comic. Most notably in the first issue, as he's partly responsible for Sonichu's existence, as described below. He also shows up to help Sonichu again in Sonichu #1, after Rosechu gets kidnapped.

Sonic also appears on the cover of Sonichu #11 and gets a episode of him, Sonichu, and Chris 'catching up' in the Patreon-exclusive pages.

"I had no idea that the Les Enfants Terribles Project had gone this far!"

Sonic the Hedgehog's love interest. Amy Rose in the video games is a twelve-year-old fangirl who has an obsessive crush on Sonic and often pursues him on his adventures to try and get his attention and appreciation.

That said, she at least does something in the video games, and often helps out the rest of the heroes on their quest, such as in Sonic Adventure, where she singlehandedly defeated the Zero robot and in Sonic Adventure 2, where she broke into a military base and freed a captured Sonic. In Sonichu, however, all her personality is gone and she is just as vapid and useless and stereotypical as any Rosechu. She shows up for a couple of pages in Sonichu #1 where she talks with Rosechu at CWCville Mall about meaningless bullshit. 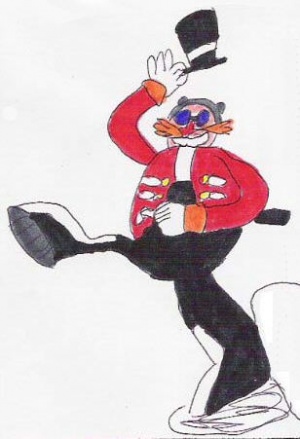 Even Eggman was never this flamboyant.

Recurring villain of the Sonic the Hedgehog games. A mad genius with an IQ of 300, Dr. Eggman has tried to conquer the world multiple times, in an effort to build his own nation of robotic followers: Eggmanland. In Sonichu, however, he shows up to help Giovanni devise a trap for Sonichu and later helps to try and take over CWCville with the PVCC. Why he would do any of these things, or have a grudge against Chris in the first place, is never addressed.

Also of note is that in the games, Eggman has a fleet of thousands of battleships, billions of robots, including elite androids based on Shadow the Hedgehog and the nigh unstoppable E-Series robots, as well as gigantic controllable mechs, and of course Metal Sonic. Not only this, but he also has access to multiple doomsday weapons, not least of all Space Colony ARK and a huge satellite (as seen in Sonic Unleashed) that could easily destroy the entire planet. However, none of these resources whatseoever are employed against Chris at any point, Robotnik instead relying on catching Pokémon and allying with Mary Lee Walsh (again, for no apparent reason).

The Ultimate Life Form created by Dr. Gerald Robotnik, this angst-filled hedgehog is the focal point of a number of Sonic games made in the mid-2000s and is the inspiration of Blake. Despite not appearing in the comics proper, Shadow DOES make an appearance in an ad for Christian and the Hedgehog Boys' solo album.

Mistakenly spelled "Mighty the Armordillo" by Chris, Mighty is a supporting character from the Sonic the Hedgehog video games, including Knuckles Chaotix and SegaSonic the Hedgehog. Due to his relative obscurity and passing resemblance to more popular Sonic characters, Mighty may be misidentified by Sonichu readers as another one of Chris's crappy "original" characters.

When Chris travels back in time to relive the moment he "created" Bionic the Hedgehog, he recalls that he would often imagine Sonic characters acting out scenes in the books he read. According to Chris, he was reading a "Fear Street" novel by R.L. Stine, imagining Mighty as one of the characters, when he was struck on the head by a basketball, and at the same moment, imagined an orange version of Sonic emerging from a locker door where Mighty was standing. 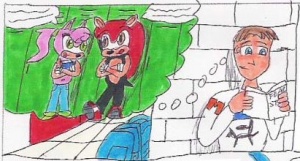 Chris has a penchant for characters that no one has heard of.

Even more obscure is Tiara. Originally created as a playable character, but later mitigated as an NPC and love interest for Sonic, in the canceled Sonic X-Treme game for the Sega Genesis, bumped to the Sega 32X, and finally the Sega Saturn before being scrapped outright. She appears alongside Mighty the Armadillo while Chris fantasizes about inserting Sonic characters in R.L Stine novels. He would mention this after lamenting the cancellation in the first IRC chat.

Nearly two years later, Chris created her in ModNation Racers. It should be noted that Tiara was drawn with orange fur and brown hair in the Sonic X-Treme concept art, yet Chris depicts her all-pink like Amy Rose. 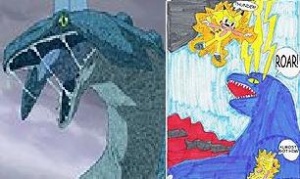 Perfect Chaos, or "Perfect Chaos Monster" as Chris calls him, is the final form of Chaos, a villain introduced in the Sonic the Hedgehog game Sonic Adventure. Composed of a liquid substance, Chaos assumes multiple shapes as it acquires the seven Chaos Emeralds, absorbing their negative energy to increase its power. Upon obtaining all seven, Chaos becomes Perfect Chaos, a serpentine creature of massive size, and proceeds to destroy the city of Station Square. Sonic defeats Perfect Chaos by utilizing the positive energy of the Chaos Emeralds, which transforms him into Super Sonic.

This battle was adapted by Chris to provide the background for the origin of Sonichu in the premiere issue of his new comic book series. The Sonichu series begins with a male Pikachu wandering into Station Square in the middle of a fight between Super Sonic and Perfect Chaos, whom Chris identifies as the "Perfect Chaos Monster". During the fight, Sonic accidentally collides with the Pikachu, somehow triggering an unexplained phenomenon which imparts Sonic's appearance and powers upon the Pikachu. The new Pikachu/Sonic hybrid awakens to find Sonic has still not defeated Perfect Chaos, and rushes to his aid. Using his new-found powers, he defeats the monster, and the onlookers, who mistake him for Sonic's super form, credit Sonic for the victory (retconning the Sonic Adventure game so that Sonic is little more than an assistant to Chris's original character). Contemplating his new form, the mutated Pikachu adopts the name "Sonichu", and returns to the wild. After that, Perfect Chaos is never mentioned again in the pages of Sonichu.

Being the other half preexisting IP that Chris ripped off from to create his character, it's no surprise that Pokémons Pokémen Pokémon would appear within the comics. 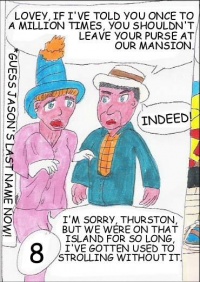 In Sonichu #8, Chris sought to humiliate his arch-nemesis Jason Kendrick Howell with a scathing parody of Encyclopedia Dramatica. In a feeble attempt to be coy, Chris refrained from identifying Howell in the comic right away, instead referring to him only as Jason, followed by a clever cameo appearance to hint at his last name. Since no anime or Family Guy characters are named "Howell", this forced Chris to delve into legitimate pop culture, and soon he found Thurston Howell III and Lovey Howell, the élitist millionaire couple on the classic TV series Gilligan's Island. Chris is probably blissfully unaware that the joke will probably sail very far over the heads of his target demographic, and he's also unaware that there are countries on GodJesus's green earth where the show hasn't aired for decades. Or ever.

Appearing outside the 4-cent_garbage.com building, Thurston chides Lovey for forgetting her purse, to which Lovey explains that she had grown used to neglecting it from their time stranded upon the island. Chris then challenges the reader to guess Jason's last name, a pointless exercise, as Chris had already mentioned "Jason Kendrick Howell" several times on his website, YouTube videos, and anywhere other public forum available to him in 2008.

For no obvious reason, William Spicer is depicted in Sonichu 5 as the Yu-Gi-Oh! character Jack's Knight. His role is extremely limited, as Chris foresees him being brutally murdered by Wes-Li Sonichu and rushes to avert this tragedy. Jack's Knight proves to be a lumbering moron, unable to save his bride Sarah Hammer from Wes-Li or do much of anything but wait for Chris to defeat the villain.

Even before becoming a tomgirl, Chris showed interest in these cartoon horses as they make a cameo in the Wedding Comic. In Sonichu #12-9, they make up the vast majority of the comic.

Since the Idea Guys were massive weeaboos, many Hyperdimension Neptunia characters were shoehorned into Sonichu #13. Neptune, Uzume, Kurome, and Blanc all appear in the issue, although their roles in the "story" are minor at best.

After control of Chris was wrestled away from the Idea Guys from the Guard Dogs, Chris completely dropped all Neptunia characters from the Sonichu comics. Chris has instead borrowed lore from the game series and proclaimed himself to be a CPU goddess (both in the comics and in real life).

Thanks to the influence of the Idea Guys, Sonichu #13 contains several characters from movies and video games.