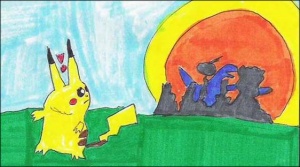 First page of the first issue, and he's already too late.

Station Square is a fictional city depicted in the video game Sonic Adventure. In the climax of the game, Station Square is destroyed by Perfect Chaos, who is in turn defeated by Sonic the Hedgehog.

In Sonichu #0, a Pikachu five mies [sic] from Station Square notices Perfect Chaos attacking the city, and goes to investigate (at apparently great speed, since he travels the five miles in practically no time). There, a fateful collision with Sonic causes him to be transformed into a new Pokemon with the combined powers of both Sonic and a Pikachu. The hybrid creature assists Sonic in defeating Perfect Chaos, eventually defeating the monster. The crowd of people nearby, who had somehow survived the cataclysm that destroyed their entire city, mistake him for Super Sonic and credit Sonic with defeating Chaos, effectively retconning the ending of Sonic Adventure so that his own Mary Sue character did all the work and Sonic was little more than an assistant to him. After the battle is over, the hybrid creature returns to the wild, naming himself "Sonichu."

In the Sonichu Chronicles, Chris makes clear that this is the same fight from the end of Sonic Adventure. He brings this up while paradoxically trying to explain that Sonichu is a Parody of Sonic rather than derivative work, while at the same time making clear that he is an in-universe character that complements and expands on existing Sonic canon. In other words, a derivative work.