From CWCki
(Redirected from Punchy)
Jump to navigation Jump to search 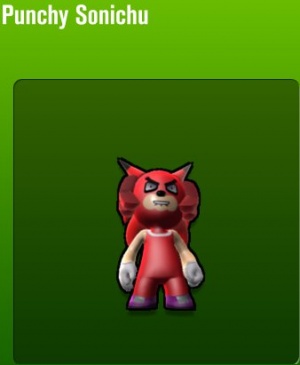 Punchy Sonichu is a Sonichu and a member of the Chaotic Combo, formed from eggs released by the Chaotic Rainbow as a result of the collision between Super Sonic the Hedgehog and a Pikachu. He is a Fighting/Electric type Pokémon. He has stated that he is very attracted to Angelica, but ended up paired with Layla, whom Chris has drawn giving him a blowjob. Punchy is thought to be a racist Asian stereotype due to his slanted eyes and martial arts upbringing. Chris denies that Punchy is of Asian origin,[4] and claimed to Jackie that Punchy's eyes were a botched attempt at emulating Knuckles's furrowed brow.[5] Despite this, both Knuckles and Pokémon were created in Japan, and Punchy was still raised in a Dojo.

However, the eyes were altered in Sonichu #10, where he looks (even more) like all the other Sonic recolors. Punchy is also a shitty Knuckles the Echidna knockoff, right down to the crescent-shaped birthmark on his chest, dreadlocks and clawed punching gloves, which makes one wonder why he isn’t an "Electric Echidna Pokémon". He is a combination of four characters:

Because Punchy is one of Chris's remotely amusing OCs due to the almost complete lack of originality (more or less simply a headswap of Knuckles) and the (possibly unintentional) racism of his design, he is a favorite amongst trolls.

Punchy is also billed as a "master of random-access humor" (which is to say he supposedly has the same shitty sense of humor as Chris), but for an incredibly long time, he had not actually demonstrated this trait even once in the comics. It finally surfaced in a video, SonichuBabies, over a decade after Chris created him – much to the anticipation of no-one. This in contrast to Wild Sonichu, who has done so several times.[6][7]

Despite Punchy being said to be freakishly strong and fierce, his power is barely seen in the comic, being reduced to just a poor comic relief, which is also the same fate Knuckles seems to have faced in recent years.

Punchy's Sonee egg lands in a Dōjō, more specifically 'Nabe's Dojo-Shin', where Master Nabe is teaching his student Mypoe to fight. After hatching, Mypoe challenges Punchy, who is still in his infantile Sonee form. She rips his tail off and this angers him into evolving quickly. He uppercuts her so hard that she flies through the ceiling and into the sky, presumably killing her. However, Chris would clarify years later that Mypoe "survived the trip; she landed into a pile of hay in a wagon right by her house far from the Dojo."[8] Things apparently got a lot bleaker after that: according to the CWCipedia article for Sonichu (of all things), Chris explains that Master Nabe was brutally murdered by an envious student and that Punchy avenged his tutor by killing the assassin himself. Punchy then buried both of them behind the school... and continued to live there. Disturbingly, Punchy's main concern at the exact same time was getting Chris to turn the electricity back on at the Dojo so he could watch television.

He keeps his temper down by "watching TV comedies."

While Punchy punches rocks into the air as part of his martial arts training his claws accidentally collide with Blake's hover board and jam in it, which causes Punchy to hitch a ride. He eventually falls off and crashes into a tree where he meets the other Chaotic Combo members. He compliments Angelica on her flowers. This is likely the beginning of his infatuation with her. After this, he vengefully participates in the violent assault of Blake, even though it was an accident.

Punchy and the other Chaotic Combo members are teleported into action by Chris. He has no speaking lines here, because Chris can’t be bothered to give any of his characters a personality.

While everyone is pretending to worry about Crystal, Punchy (sympathetically for the reader) thinks to himself “I’m missing my Samurai Pizza Cats.” When the girls start babbling about Bionic the Hedgehog’s basketball abilities, Wild and Punchy act like jealous children. Punchy thinks women should be more impressed by his brute strength than Bionic’s athletic talent. When Patti remarks on how sweet Chris is, Punchy tells her what an ass-kisser she is (cementing his place in the hearts of trollkind).

Here, Punchy reveals his feelings for Angelica to Wild. He says he doesn’t know how to ask a girl out and is too afraid to make the first move (which happens to be a trait of Knuckles, as SEGA has said a few times he is shy around girls). Wild then informs him that the CWCville University is offering a Dating Education course. This thrills Punchy, who insists on signing up for it as soon as possible.

In this story, Punchy goes to the CWCville University to learn how to date. Despite the entire premise of his attendance being notionally to ask out Angelica, the teacher pairs him up with Layla and he totally forgets about Angelica and makes no mention of her. Using his totally awesome motorcycle with a sidecar, which he has all of a sudden, he takes Layla on his first date to the classiest joint in CWCville – McDonald's. While he feeds Layla a french fry, Reginald Sneasel tries to sabotage their relationship, but fails. So he mopes outside the joint. Lucky for the Sneasel, Angelica just happens to show up, Punchy failing to even notice his past crush is right outside.

Punchy, Wild, and Reginald Sneasel all get laid immediately after Dating Ed (presumably on the third date). Punchy supposedly has a hangover at the beginning of this episode despite the fact that drinking was illegal in CWCville.

Nothing bad ever happened in China on June 4!

Punchy had a major hard-on for Angelica, but then after meeting Layla he forgot all about her, perhaps thinking the Catholic Angelica wasn't going to put out as quickly as Layla would. He would have been wrong, though; Angelica spread her legs without a moment's hesitation for Reginald Sneasel.

While Punchy was portrayed as a typical hapless shy suitor completely befuddled on how to approach the opposite sex (i.e. Chris-chan, Wild, Sonichu, etc.) Punchy deviates from the norm by being the only non-jerk male to make the first move in approaching a lady in the series once he sees an opening. By being willing to change himself and his methods, keeping his options open, remaining optimistic about his chances of seducing someone, being relaxed when talking to a potential partner of the opposite sex, and improvising when things didn't quite go his way, the author once again inadvertently wrote a scathing indictment on the haplessness of his own Love Quest.

"Punchy and Layla's Dance In The Dark" reveals that either Layla likes it rough in the sack or Punchy gets off on smacking her around.

This relationship comes to an end in Sonichu 11, when Layla leaves him, fed up with Bananasauros's antics. She then sleeps with Reginald almost immediaetly after the breakup, implying neither Reginald or Layla actually cared about their significant others, which leaves Punchy and Angelica the only members of the Chaotic Combo without Heartsweets. Perhaps Chris will go back to his original idea of pairing them together?

Prower, the Motorbike of Fail

According to CWCipedia, Punchy's aforementioned totally awesome motorcycle, Prower, doubles as a ninja Autobot with "Razor-Sharp Choppin' Hands, Shuriken Stars and holographic images." This makes Punchy a "Sharp close-bot attacker," as well as yet another manifestation of Chris's rampant plagiarism.