Allison Amber (born 1979/80) is Chris's secretary in Sonichu. She was introduced in Sonichu #6 to explain how Chris can be Mayor of CWCville without actually doing any real work.

In February 2017, Chris casually mentioned Allison Amber as being the mayor, with himself holding the title of the "creator" of the city.[1]

In Episode 12.5, Chris introduced his dog Patti (1988–2006) to the storyline by having her magically transformed into the talking, bipedal Patti-Chan. Chris took her to the CWCville Mayoral Office, where she could run free among the Electric Hedgehog Pokémon without grossing anyone out.

Writing this part of the story must have forced Chris to give serious thought to his fictional duties as Mayor, in light of the events of Sonichu #4, where he was shown mostly sitting around in various shops and fast food places eating junk food and hoping that women would notice him. Typical of Chris's thought process, he quickly realized the solution to this plot hole: he has his secretary do everything for him.

Enter Allison Amber, a former movie star who "retired early to pursue her dream of being the aide of a big cheese like [Chris]."[2] This would be an interesting premise, except Chris has no interest in exploring the irony of a successful movie star aspiring to be a humble Mayor's aide. Instead, this seems to just be more window dressing for Chris's fantasy life of having the ultimate goal of all women being submissive to him. Not only does he have super powers and rule a whole city like a king, but he's also got an ex-movie star handling his paperwork.

Allison is around Chris's age and white. Fans wondered why Chris wouldn't just go out with her instead of getting arrested for loitering at Target, so Chris established that Allison is currently "in a relationship with her... ugh... boyfriend."[2] Observers at first assumed that Chris still had too much pride to create a fictitious sexual partner for himself, but such optimism has since been scuttled.

Allison is quite possibly the most depressing character in the series. Because, let's face it, the only thing more pathetic than being Christian Weston Chandler would have to be being his assistant. This makes Allison a popular character in troll works, usually portrayed as a sensible but beleaguered woman who puts up with Chris's insanity. Compiling this depression further is the fact when Chris finally quit being the mayor of CWCville for good and Allison finally got some actual authority, it only lasted a few months before she became "violently ill" and had to resign, being replaced by Brendan Fraser, a Hollywood film actor with no prior history in politics. Her current fate is unknown. 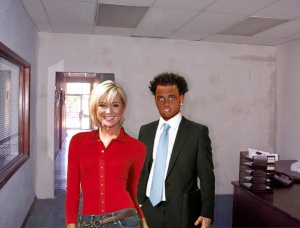 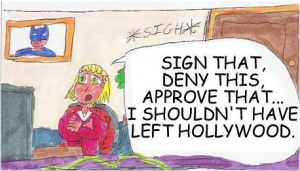 As Chris explains to Patti, Allison receives "incoming documents," looks them over, and then explains the gist of them to Chris over the phone. She then scans the documents, and uploads them to the "CWCville Sattelite", which relays the information to Chris's Nintendo DS, which has Wi-Fi capabilities as well as PDA functions. Chris can then read the documents for himself on the DS, and sign off on them using the touchscreen and stylus. The documents are then sent back to Amber, who prints them off with Chris's signature.[2]

Alternatively, Allison could just forge Chris's signature and save a lot of time and trouble, but she probably sends a few over to Chris just to make him feel important.

In addition to clerical work, Allison also prepared a cell phone and credit card for Patti to use in her new life in CWCville. Chris instructed Patti to call either himself or Allison in case of emergencies, so it's a safe bet Allison's the one who's actually going to have to look after Patti and pick up her shit.[2]

In Sonichu #7, Chris was stranded indefinitely in the Time Void. Upon learning this, Rosechu indicated that Allison would be able to "handle city decisions" in his absence, making her the de facto Acting Mayor. She appeared again in Sonichu #8, apparently weary of her newfound responsibilities, because apparently it's too much for a mere woman to handle. Her final appearance so far is in Sonichu #10, where she, along with Bill the Scientist and Kel, takes part in the execution of Sean, the three of them shooting him for "target practice" as a firing squad. This may imply that she's also an executioner.

In the CWCipedia, Chris clarifies that Allison has actually been Vice-Mayor the whole time, but apparently because she's a woman she has to settle for the lowly title of Secretary. Chris also clarifies that "NO FAVORS OF ANY KIND WENT ON Between [him] and her," correctly deducing that we would all assume he would use his authority as mayor to force himself on the nearest pretty girl. Oh, and this information all appears on the BILLY MAYS article, because Chris won't waste the time to create a CWCipedia article on a woman unless constantly pressured.[3]

Allison was promoted to Mayor sometime between 2015's Sonichu 11 pages and 2017, when Chris declared CWCville to be a sanctuary city in the wake of President Pmurt being sworn into office.[4]

She refuses to acknowledge President Pmurt's authority by ignoring his executive orders and hiring electric-hedgehog Pokémon to guard the city (who use more extreme measures than anything Pmurt has done).

For no clear reason, Allison has a picture of Batman hanging on the wall behind her desk. This may be a reference to: