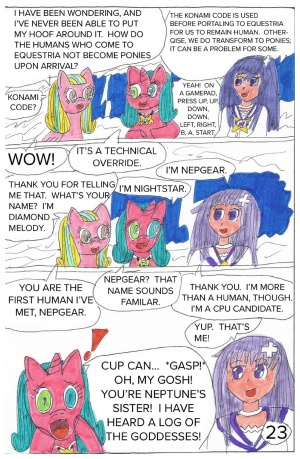 The Konami Code was a cheat code that provided extra health in certain Konami video games such as Contra and Castlevania. It was popularized due to many of these games being very difficult to beat and using the code was a necessity at certain points.

Due to the popularity of the code, it has been used in non-Konami video games, websites and applications to activate easter eggs.[1] Chris too has added the code into his own universe for a different reason, since he already has infinite health.

Unfortunately Night Star forgets the code, and says it wrong, forgetting the second Left Right, and doesn't look it up on Google, her rendition is: Up, Up, Down, Down, Left, Right, B, A, Start. It is unknown if the Konami code is just different in C-197, or- the more likely story- that Chris just forgot it when writing the comic book.

The code is prominently discussed in Sonichu 12-9, using the code before entering Equestria prevents humans from turning into ponies. Where and how the code is input is a mystery. In the comic, Chris explains to Diamond Melody that the code is a "technical override" that is input on a gamepad.[3]

Chris also believes that he can enter Equestria, he shows himself (the real life Chris, not Comic Chris) entering a portal in Sonichu 12-9 and mentions that he will not be using the Konami code, when he exits the portal, he is in his pony form. Chris talked about it again in the Count Dankula interview, where he tells the host that without the code, he would become an alicorn.[4]

The code may also work vice-versa, as when Diamond Melody and Night Star portalled their way into CWCville park, they turned into humans and Chris explicitly states that they didn't use the code in this situation.[5]

But a contradiction arises a few pages later when Night Star and Kun Hanhphuc portal into the GE plant, Night Star uses her powers to turn them into humans instead of it automatically converting them.[6]

It is yet to be explained in what situation the code is to be used or how it is to be used, but knowing Chris, it may remain a mystery forever.