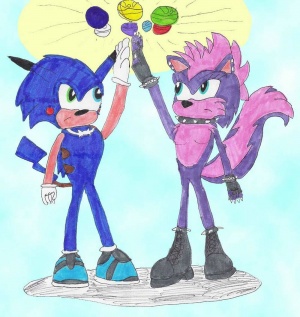 Chris-Chan Sonichu and Megagi La Skunk pose with their balls out.

The Sonichu Balls are seven plot coupons resembling Poké Balls that the heroes of Sonichu aim to collect. They also seem to have elements taken from the Chaos Emeralds and the Dragon Balls.

In the Official Videobooks Chris begins to refer to them as "Sonichu Crystals", presumably to quell all the balls jokes. Still, the story's still about a group of guys leaving their women behind as they all go out to look for multicolored crystals together. He also calls them "Sonichu Ball Crystals" from time to time, rendering the whole endeavor pointless.

Chris retconned the Balls yet again in Sonichu #10, where they became "Chaotic Crystals". This further cemented their status as rip-offs of Chaos Emeralds.

As revealed on the CWCipedia[2], the Sonichu Balls were created by the same rainbow that was unleashed by Sonichu and Rosechu's creation, going all the way back to 1900, trapping it inside a Ancient Tablet in the land of RuleCWC.

According to Darkbind Sonichu, the Sonichu Balls were unleashed from an ancient tablet by the evil wizard Clawdorf. Clawdorf used the power to curse Darkbind's gal-pal Zelina Rosechu into a magic sleep. In the process, however, Clawdorf was turned to stone, leaving Darkbind to gather the Sonichu Balls and use them to break the curse. How Darkbind knows this will work, and why the Sonichu Balls were scattered throughout the world in the first place, are never explained.

Like anything else in Sonichu, the Sonichu Balls appear to be little more than a mish-mash of other people's ideas. The four most likely sources are as follows:

No one knew what the hell the Sonichu Balls were supposed to do. 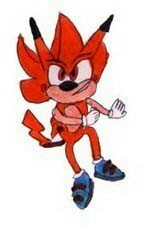 Since they're essentially just stand-ins for the Chaos Emeralds, however, collecting them all gives Sonichu the power to transform temporarily into Ultra Sonichu, Chris's long-hinted-at "super" form of Sonichu. However, there was no indication that this would happen in the series until it just kind of... did.

Reldnahc attempted to aim one of the Balls like a weapon, although he never got the chance to use it, so there's no telling what, if anything, it would have done.

For most of the series, the Sonichu Balls mostly just seem to screw people over. They turned Clawdorf to stone, glow at inappropriate times, and fling people into a "Time Void". For some reason, holding two of the Sonichu Balls caused Wild's invisibility power to konk out, and Blake got owned by Silvana because Bubbles was searching for another. It wouldn't have surprised anyone if they exploded or something once they were all in the same room. Instead they just turned Chris into slightly more of a Mary Sue.

Sonichu #10 shows that holding a Ball or two can at least increase Magi-Chan's psychic powers enough for him to travel reliably through time, before finally being used for presumably their true purpose as Chaos Emerald ripoffs: transforming Sonichu into his Super Form. It also allows Chris to transform into his hobo form.

Another curious property of the Sonichu Balls is that they can be absorbed into a person's arms. In the time void, the two Balls Chris holds enter his arms for no obvious reason (likely, just so Chris wouldn't have to draw them regularly). Later, Wild prays to the Sonichu Balls or something, and they disappear into his arms, enabling him to use his hands. After he escapes the 4-cent_garbage.com Building, he says a silly rhyme to command the Balls to rematerialize. How he knows to do any of this is — yep, you guessed it — never explained. You'd almost think Chris didn't put very much thought into this storyline.

The Sonichu Balls would not be mentioned again until Sonichu #6, when Magi-Chan theorizes that the combined power of all seven Sonichu Balls could free Crystal Weston Chandler (sister) from the Dark Mirror Hole, based on the mirror's reaction to the one Sonichu Ball in their possession.

Magi-Chan never explains how he learned of the Sonichu Balls, or how he found the one in his possession. Nevertheless, the next several episodes of the series are dedicated to the Electric Hedgehogs' quest to hunt down the other six Balls. Magi-Chan suggests the seven Chaos Emeralds as a possible alternative, but this is never explored.

Since the Sonichu Balls glow when two or more of them are in proximity to each other, Magi-Chan discovers Darkbind's two Sonichu Balls during their conference in Sonichu #6. Coincidentally, a fourth happens to be in the Kay Jewelers store in CWCville Mall, which is stolen almost immediately after Magi-Chan and Darkbind's balls are first revealed.

The thieves, Reldnahc Notsew Naitsirhc and Black Sonichu, use explosives in a daring daylight robbery. Reldnahc boasts that the Sonichu Ball will help him take over the world, and when Chris confronts him, he wields the Sonichu Ball as a weapon, threatening to finish Chris off. His attack is prevented by the timely ambush of Bionic the Hedgehog, who recovers the Sonichu Ball and gives it to Chris. For those of you keeping score, that makes four Sonichu Balls out of seven recovered within 23 pages.

The search continues in Sonichu #7, when Magi-Chan uses one of the Balls in conjunction with his psychic powers to locate the fifth ball in Manchester High School, but stuck in the recent past. Together with Sonichu and Chris, Magi-Chan leads an expedition back in time to 1996, when the Sonichu Ball materialized and hit Chris on his head the day he created Bionic the Hedgehog. Sort of like the apple hitting Isaac Newton, only with more fail.

After successfully retrieving the Sonichu Ball, the trio return to their own time, but Chris, holding his two Balls in his hands, is flung into the Time Void, apparently propelled by some unexplained energy burst from the Sonichu Balls. Magi-Chan expresses confidence that Chris can be brought back, but is uncertain as to when or how.

In the meantime, Magi-Chan continues tracking down the remaining Sonichu Balls. He detects the sixth in the 4-cent garbage.com Building in Clarksville, Tennessee, and dispatches Wild Sonichu to retrieve it while Sonichu and Rosechu meet with Jason Kendrick Howell to protest the Chris-Chan page. Wild sneaks into the building undetected, and discovers the Ball stored in an empty room. It is not explained how the 4-cent_garbage.com guys got a Sonichu Ball, what they intended to do with it, or even if they knew it was there at all.

The seventh Sonichu Ball is detected five miles off the Virginia coastline during CWCville's Spring Break (which the characters observe despite none of them being in university), and Magi-Chan sends Bubbles to locate it. She recovers the Ball without incident and Angelica flies it back to CWCville Mall.

With the other five Sonichu Balls gathered in Christian's office, all that remains is for Chris himself to return from the Time Void, along with the two Balls in his possession. At the end of Sonichu #9 Chris just falls out of the Time Void on his own without any incident.

After Chris spends thirty pages or so killing trolls, wasting time on plans and the like, Chris finally uses the damn things, transforming himself and Sonichu into Collosal Chan and Ultra Sonichu. Chris uses his power to just walk in and pull his sister out of the Mirror without fanfare. Ultra Sonichu uses his power to wake up Zelina Rosechu, who replies to her predicament with "Awww." The two reunite and fly to Minnesota and Alec Benson Leary's home, where Chris invades Alec's computer, deletes the Asperpedia, steals a dating sim and blows up his Hex Box. Ultra Sonichu, however, finds Asperchu and the Sonichu and Chaotic Combo of that universe and proceeds to use "Chaotic Remedy" to rid them of their personality (which he mistakes for Asperger's syndrome). Collosal Chris-Chan arrives to much fanfare and, after a brief battle with Metal Asperchu, does not much else with his God-like powers until he eventually confronts Mary Lee Walsh. As Sonichu was clearly able to defeat her in his normal form in the previous issue, but chose not to as it was Chris's right to defeat her, there's absolutely no point in Chris wasting his super form on this fight.

Darkbind seemed somewhat concerned at first that sharing his Balls with the others would endanger his plans for them. This suggests that the Sonichu Balls can only be used once, although this doesn't matter because Crystal is freed from the mirror and Zelina is revived with just one use of the Balls.

On Christmas Day 2020, Chris claimed that an eighth Sonichu Ball (which he called the "S-Chu Crystal Balls") had manifested at the temple of Chris Chan Sonichu, i.e. 14 Branchland Court. The retconned history said that the Balls had existed "between 1218 and C-197 [...] manifested from the Chaos Emerald energy from the Chaotic Rainbow of 2003, the seven of them were broken to make the Mega Stones."[4]