In September 2017, while in the virtual bosom of his new sweetheart, Jessica Quinn, Chris inserted her into the world of Sonichu. In addition to reinterpreting a previous character, Chris created a ponysona named Diamond Melody. Melody appeared in Sonichu #12-9; however, with Quinn's breakup with Chris and the eventual emergence of the Idea Guys in late 2017, Melody would be condemned to a single comic and be replaced with a new horse sweetheart, Kun T’Nyuget.

By the time Chris and Jessica had started their relationship on 7 September 2017,[2] Chris was already in production of his newest issue of Sonichu, which he decided to base on My Little Pony. Months prior, having attended BronyCon 2017 with minimal problems, he had a new-found inspiration.

On 17 September, Chris published a drawing of Night Star paired with a new OC. Later that day, he posted a reference drawing of the new character, who bore the name "Diamond Melody".[3]

By early October 2017, Chris and Jessica were no longer a couple.[4] Within that same month, the Idea Guys began to manipulate Chris – an influence which would gradually seep into the comic series canon, especially with regards to Diamond Melody. 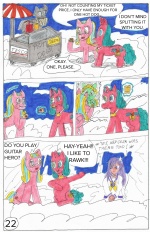 Can you spot the Idea Guys' input?

In the first story of Sonichu #12-9, Night Star transforms Comic Chris into a more identical clone of herself – with the only distinguishing feature being a white skirt. She then guides her CWCville counterpart to the human Diamond Melody, who is across the campus chatting with Vinyl Scratch and another student. It is revealed that in Equestria, pony Diamond is Night Star Prime's sweetheart, which effectively guarantees white skirt a fair chance.

Melody is approached by white skirt, who instantly recognizes her newly transformed fellow student, and compliments her art style. After a brief conversation, they all decide to meet up at the cafe after school.

The second story chronicles Night Star's first meeting with Diamond Melody. Both ponies are lining up for a concert in Cloudsdale, where Vinyl Scratch is "headlining" Slayer (this is apparently a universe where an EDM artist and a thrash metal band share the same lineup at a gig).

After Night Star eavesdrops on Melody's conversation, she smooth talks her way in and neggs Melody on her taste in Equestrian sports, at which point the discussion descends into a long back and forth about the speed of Pegasi. After losing the argument, because of course, Melody invites Night Star to a Tesco food stand, where they share a hot dog.[6] Shortly before they enter the concert, Nepgear manifests next to the duo; they all discuss how to enter Equestria without morphing into a ponysona. Upon hearing of Night Star's rapport with celebrities of many dimensions, Melody gradually warms to Night Star.

Immediately after the concert, Star and Melody decide to have an impromptu date in CWCville. Melody initially struggles to walk on two legs, but Star eases her towards the notion. They visit a Tesco store, where they share anecdotes over ice cream. At the end of the day, the pair end up at the house of Comic Chris where one thing eventually leads to another.

Despite going on further dates, Night Star concludes that Melody's Earth 1218 counterpart, Jessica Quinn, was doxed and unveiled as a troll. Carrying the burden of this truth, Melody was ashamed to be associated with Quinn, and could no longer feel at ease with Star; thus, she moved to Las Pegasus.