Sandy Samantha "Sammy" Rosechu is the bastard daughter of Simonla Rosechu and Wild Sonichu, with many of the same design elements as the former and none of the latter, making her yet another kludge of a certain Chu. Thanks to her father's lust for vengeance overpowering any sort of paternal instincts, she is able to harbor a desire for revenge and ninja-skills at a very young age thanks to her training, and is later shown to not only be ludicrously hostile towards males for seemingly no reason, but also eager to murder anybody that calls her by any form of her middle name. Despite being robbed of her childhood and trained in the art of killing, nobody in CWCville seems to object to her upbringing, and so the child soldier walks unattended, searching for her next target. 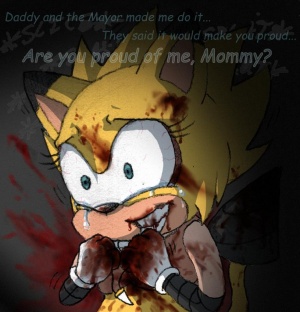 In February 2010 Chris finally caved to pressure from Evan, and agreed to kill off Simonla. He fleshed out the original death page to reveal that Wild and Simonla had managed to shit out an egg together. It should be noted that Wild and Simonla were, as far as we know, never married, so Sandy is a bastard child. Moments later, Simonla is fatally wounded in a toilet explosion, and Wild sits on the egg ruminating about how much he and Simonla were looking forward to being parents, in an attempt to make readers caring about the little blessing. Shortly after Simonla dies, the abomination hatches and asks where Mommy is. Being sensitive and tactful, Magi-Chan promptly tells her that "Evan killed Mommy" (it was actually Alec)[1]

Less than a week after her hatching, Wild tricks Sandy into playing with Soft Sand. According to Chris's CWCipedia ramblings on Rosechu evolution, a Sandy Rosechu will evolve when it has high happiness and soft sand. This provides a possible explanation for how she was fully grown within one week.[2] It is not unlikely that her very name is related to the role of sand in her evolution. The fact that this means Wild essentially stole his daughter's childhood and forced her to grow up in order to fulfill a revenge fantasy is both incredibly disturbing and completely in-line with the rest of the horrifying content present in Sonichu 10.

By the time Evan, Alec, Mao and Sean go to trial for killing Simonla, she has the intelligence of a fourth-grader. Naturally, all four are found guilty and are sentenced to be murdered in the most violent and bloody ways imaginable. Wild, responsible father that he is, encourages Sandy to brutally eviscerate Evan. Sandy does so, going as far as to mutilate Evan's genitals, right after displaying psychopathic tendencies by taking Evan's glasses as a trophy (a trait shared by Ted Bundy, Jeffrey Damher and Ed Gein, by the way). The duo round off this wholesome daddy/daughter bonding activity by delivering the killer blow together.[3] If this wasn't fucked up enough, consider that Evan is technically, by the standards of the CWCiverse, Sandy's grandfather.

Sandy was basically a giant "Fuck you" to Evan, since she was little more than a smaller version of Simonla with a few cosmetic changes and an epic THIRST! FOR! BLOOD! Chris even goes into detail that Sandy is basically filling every single role Simonla did, becoming a construction worker, hanging out with Zapina and basically every single thing Simonla has ever been seen doing[4] (which, fortunately, was very little/completely offscreen, and hopefully not also everything she did for Wild).

According to the CWCipedia, she is a good friend of Sonichu and Rosechu's children and in the years prior, attended Anneweston Elementary School with them.[5] 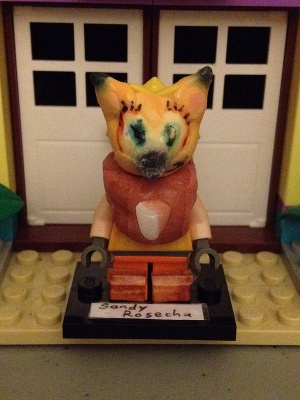 In the years the comic lied dormant after the conclusion of Sonichu 10, it was a mystery if Sandy would be a recurring or regular character, or if she'd get sent to the Moon. Readers speculated that if she became a recurrent character, she'd probably follow in her mother's footsteps and devolve into yet another soulless husk who lived only to validate the heterosexuality of some random Sonichu.

On 24 May 2014, Chris revealed on Facebook that Sandy's mother had come back from the dead to rather negative, and later indifferent reception. Readers pondered if this was good news for Sandy as her mother was now alive, or bad news because it meant she was completely pointless now and would be religated to obscurity. However, readers seemed to underestimate Chris' emotional attachment to his hedgehog "family" and didn't realize that now that Sandy was a part of his insane coping mechanism, Chris would never let her disappear as long as he lived.

After years of inactivity, the Sonichu Christmas Special came back from hiatus. It was revealed that Simonla had a powerful healing factor and her bones were made from a powerful metal named "Simatanium" in her honor. Between February and December of that year, Simonla was in and out of the hospital recovering, confined to a wheelchair for most of the later months. Sandy had limited interaction with her mother during the time due to her hospitalization, but after her mother fully recovered on Christmas Day, Simonla finally returned home, and Sandy was able to bond the mother that was almost taken from her.

The grisly, gruesome murder Sandy was forced to commit by her father had now been erased from history, and instead her mother's attackers were sent to live in Amish Country. This is mostly because trolls convinced Chris to backtrack on the gorey ending of Sonichu 10, but also partly because he probably realized it was extremely fucked up to have an adult instruct a child to drill a man's cock off.

Later, Sandy was the first to see her uncle, Simonchu, when he visited their home. Despite Simonchu having very little to do with Simonla's assault, Sandy still went into a psychotic rage and threatened to murder Simonchu. While in light of the recent retcons this may seem like an overreaction, later issues seem to imply Chris' OCs retain memories of previous timelines, which might explain why she's still so fucking psycho.

Simonla manages to calm her crazy ass daughter down, and after Simonchu explains the situation and how he had basically nothing to do with the attack on his sister, Sandy began to warm up to Simonchu. The two later bonded while exploring fossils.

Afterwards, Sandy had very little to do in the comics. Chris would occasionally mention her in passing or have her in a crowd shot. Just like he said on the Cwcipedia, Sandy was revealed to go to school with Sonichu's kids and be friends with them, even attending the SLGBT Pride festival together. While initially readers speculated that Simonla's return would reduce Sandy to an extremely minor role in the comic, Simonla was also relegated to the same level of obscurity, making them both equally pointless.

In Sonichu 13, Simonla's family home is destroyed when the tunnels she dug under CWCville collapse. Sandy, her mother and all her female friends were kidnapped by Nazis, and they were then all gang-raped by Nazi prison guards and forcibly impregnated by Nazi Sonichus to breed new soldiers for their dwindling army. They were all rescued when Chris and an ally brutally slaughtered all the Nazi guards. This horrific event undoubtedly further traumatized her already horribly scarred psyche.