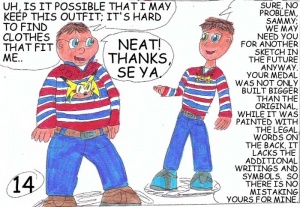 Sammy is a character that Chris created for a Ghostbusters "skitch" in Sonichu #7 that is blatantly based on Peter Griffin, lead character of the animated series Family Guy. He was created for a sketch (or "skitch", as Chris calls it) done in the style of that series, but what Chris didn't seem to understand is that the various cutaway gags in Family Guy are at least marginally relevant to the actual plot of each episode. In the context of the comic, it comes across as a complete non-sequitur, given that the scene has nothing to do with him getting bonked in the head due to his own negligence.

The sketch consisted of Sammy wanting to use the bathroom, only to find it occupied. He then confuses the transformation booth as another toilet, when suddenly he is hilariously thrown around a large spooky area that changed his clothing into the Ghostbusters uniform, before finally defecating in an early 20th century vehicle that can talk and feel pain. Chris gave Seth McFarlane permission to use the skit. (Oddly enough, the first few minutes of the Family Guy episode "Road to Germany" bears an eerie resemblance to this, with the ending also featuring a scene of a character crapping their pants. Maybe the Manatees writing the show are part of Chris's True and Loyal Fanbase?)

Chris promised Sammy could return in another issue, if needed in another sketch and also let him keep his clothes, which miraculously fit him perfectly, presumably thanks to their incredible elasticity.[1] Sammy has not appeared in the comic since then.

Ironically, Sammy's physical appearance and personality more closely resemble Chris in real life compared to the slim portrayal of himself in his own comics. Sammy's massive girth, foolishness, glasses, and nonexistent heterochromia (which is closer to what Chris' eyes actually appear as rather than his exaggerated comic self) all make Sammy look more Chris than Chris. Sammy's appearance even ends with him shitting himself. Could Sammy in fact be a Freudian "Mary Sue" for Chris?

In September 2018, Chris stated that Sammy was in fact one of his self-counterparts in Dimension C-197.[2]