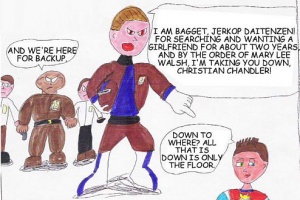 Marcus Baggett (spelled by Chris as Bagget) is a senior police detective who currently works for the Albemarle County Police Department. He is the "Jerkop of all Jerkops" who arrested Chris at Target in July 2005. Baggett has done numerous good deeds over the years for his community; naturally, Chris has gone to great lengths to demonize him, proving once and for all that no matter the great deeds someone has done, if they inconvenience Chris in any way they're evil. When Chris was being arrested, he found the situation humorous when he learned the jerkop's name, thinking how "Baggett" sounds a lot like "faggot". Witty.

Not much is known about Baggett's personal life, but it is known that he was commended by the local House of Delegates for his selfless commitment to public safety after stepping down from his squad car to rescue two people from a smoking restaurant, shortly before it erupted into flames, on 9 March 2002. Ironically, one of the sponsors of the resolution was Robert Bell, who would later on defend Chris in court.[1]

In 2008, Baggett participated in the 16th Annual Polar Plunge along with several other police officers from the Albemarle County Police Department to raise money for the Special Olympics of Virginia. He personally succeeded in raising $630.[2]

In 2009, Baggett was named The American Legion's Commonwealth of Virginia Law Enforcement Officer of the Year.[3] He later participated in the shooting of Colby Eppard on 1 January 2010 after the 18-year-old stole a police car and shot at several officers. Baggett fired a stinger to burst Eppard's tires, and subsequently fatally shot Eppard alongside several other officers.[4]

You'd think that Chris would recall that he had previously said that all cops were good so long as they wore blue and black.[5] However, because Baggett, a real police officer, arrested Chris (for completely legitimate reasons), he is suddenly not a TRUE and HONEST police officer. So, according to Chris, cops are only okay if they wear blue and black and don't try to arrest him for breaking the law.

Bagget appeared in Sub-Episode 7 in a dramatization of Chris's arrest at Target. He is portrayed as the "Jerkop Daitenzen", a sort of strange evil Power Ranger, and a reference to Excel Saga. He wears a brown uniform like the other Jerkops and at times wears a helmet in the same color. He also wears a pair of white gloves and boots, both with blue stripes to complete his appearance, looking somewhat like one of the many Kamen Riders, but without a mask. He commands a great number of Jerkops, as well as the Crackder that takes Chris down. Mary Lee Walsh seems to hold him in high regard, and at one point refers to him as "the strongest most evil villian [sic] ever,"[6][7] apparently making him more evil than Count Graduon.

He is called into action after Chris assaults Turdijerk and Trebor Capman, backed up by the Jerkhief and his men. He fights with a sword, and calls in Crackder to defeat Chris when he fails to fell the manchild himself, which it successfully does. He also briefly lapses into ye olde English for some reason.[8] After a brief round of torture, he then throws Chris into Crackder and they fly off to PVCC, where he presents a hog-tied Chris to Mary Lee Walsh on a giant plate. Despite Chris's humiliating defeat at his hands, he never gets any kind of revenge on Bagget, and he disappears from the comic after handing Chris over.

He would later return in Sonichu #7, making a brief cameo at Mary Lee Walsh's villain meet-up. This was his last appearance in the comic, and his ultimate fate following the destruction of PVCC at the end of Sonichu #10 is unknown.

In later retcons, Chris changed his name to "Dagget"- it's not known whether the Angry Beavers reference was intentional.