Christine Rosechu (born Christine Rosey, 7 October 2006) is the daughter and middle child of Sonichu and Rosechu in the Sonichu universe. Christine's name may come from the feminine variant of Christian's name (due to his narcissism) or his obsession with the name "Crystal." It should be noted that while Chris was uploading images to use as thumbnails for his character bio pages, he attempted to display a non-existant image file entitled "CrystalRosey.jpg" where a drawing of Christine should have gone.

Christine's purple color provoked debate among the fanbase, which theorized that Magi-Chan could be the real father. Chris angrily denied these rumors of cuckoldry, stating that Christine is a "Shiney" Rosey, i.e. an ultra-rare Pokémon with alternate coloration, and that Sonichu is indeed her father.[2][3]

Given the fact she is a shiny would imply she should be seen as special or have some hidden talent, or at least be the focus on some exciting plot, as shinys are rare in Pokemon and treated as very special and priceless.

Nope. That trait is given to another child, who can even Sonic Rainboom 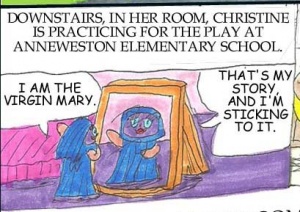 Sonichu: The comic that's not afraid to tackle child molestation.

As babies, the three Sonichu children had no discernable personalities and tempted fans to draw lots of horrible guro art. Their first prominent appearance was in the sign Chris drew to show his support for McIntire Park. The children also appeared in Chris's disingenuous plea for helping Haiti.

In Sonichu #9, the siblings appear but do nothing except occupy the time of their Spanish lesbian nanny, Heather Iglesias, because like the parents in Mary Poppins, Sonichu and Rosechu simply couldn't be bothered to care.

In November 2011, Chris began to unveil details about the siblings as post-pubescents. He revealed that they had formed a pop band: Robee Sonee and the Tomgirls. Crystaline Rosechu [sic] had become a bisexual,[4] even though Chris had wiped out all homosexuality in Sonichu #10. He eventually fixed this oversight in 2015.[citation needed] . And like her sister Cera, her sexuality is not as important as Robee's coming out story in Episode 25. It is just a mere side note

In the new 2015 pages of Sonichu #11, Christine appears in the Christmas pageant as the Virgin Mary, but midway through the performance suddenly begins to evolve. Embarrassed, she runs off stage and into the bathroom, and Sonichu is forced to run home and get Rosechu's clothes for her to put on (being oddly specific, instead of just saying "run home and get some of my clothes", she must tell him every article of clothing, including her panties), even though Rosechu is the only girl Sonichu/Rosechu to wear clothes, minus Magi Chan's vest and Silvana's scantily clad get-up.

Chris, for some reason, decided her parents would be the best to talk to her about her evolution, even though neither Sonichu nor Rosechu experienced evolution from a Sonee/Rosey to their current state,just evolving as pokemon, then into their adult forms-with Rosechu mysteriously evolving into a dress, shoes, and hairband.

When he offered his Christine Amiibo for sale on Etsy, he put together a character summary:

Chris revealed some spoilers to an eBay customer: Christine will eventually date a girl named "Karen Lyon" who "took her back to her place eventually and totally went Tribbing on her!" A later sexual encounter with a dude named "Benjamin Matthews" will confirm Christine's bisexuality.[5]

Also note that, like Robee, Christine will apparently have sex with a female lover, then with a male. Given the fact that, in canon, Christine is currently a minor at eleven years old, unless Chris sets this into the future, This has some horrifying implications.