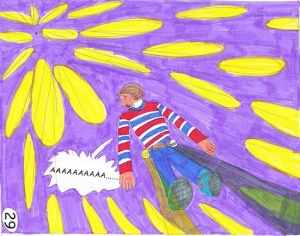 Chris, being flung down the taut cavity of time.

The Time Void (also known as the Void of Time, Little Pig Blanket, or the PlayStation Network) is a plot device in the Sonichu canon, devised by Chris as a method of stepping out of the comics.

Gotta go back in time

Chris, actually acknowledging the criticisms from fans that the Sonichu comic had become focused more on Chris and his Love Quest and less on the titular character who zaps to the extreme, decided to send his comic persona into a limbo.

Enter Sonichu #7 – two of the Sonichu Balls are activated during an adventure through the time stream which disrupts Magi-Chan's shield, and exiles Chris from time. Sonichu and Magi-Chan realize Captain Clownshirt is missing, but don't have any significant solutions to help him. Christian, meanwhile, attempts to sound sincere and empathetic while prattling on with his falsely-remorseful soliloquy in the Time Void. Narration reveals that the Void was in fact God's "twist of fate that would force me into a long, emotional, forced, stressful hiatus".[1] 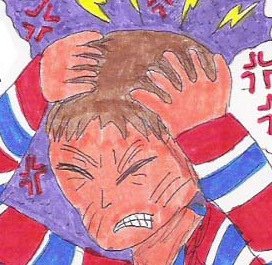 Wait, haven't I seen this before?

A stripe-shirted goldbricker taken out of the storyline? It sounds familiar because it is! This is essentially the same scenario as Mary Lee Walsh's Dark Mirror Hole, and the fate of Crystal. The difference in this situation is that, despite being stranded between time, Chris is able to deliver endless neurotic thought bubbles and has the ability to absorb the Sonichu Balls (with an unknown result).

In appearance, the Void also shares a common design with the Dark Mirror Hole: a solid marker color. The Time Void gets a little more page space, but that's expected in order to fit all the words coming out of the autistic warrior's TRUE and HONEST mind.

Christian didn't quite leave the pages of his comic so quickly, and popped up in a backseat role:

Note that these are simply self-indulgent cameos for the author. The Ivy encounter was intended to further the Love Quest sub-plot turned major story arc, although it's unlikely this will be revisited due to her demise.

Allison Amber acts as the Vice-Mayor, and carries out all of the mayoral duties of CWCville while Christian is persona in absentia. Readers are not informed towards any civic news under Ms. Amber's tenure.

The Hedgehog Boys (and Girls)
Chris is basically forgotten by the Electric Hedgehog Pokémon so that they can focus on sex and dating. In addition, the fight sequences in Christian's absence no longer showcase the Jerkops. The presence of the Creator, however, is still conveyed even without an active role as he has his pussy whipped titular character ramble on with an incoherent bigoted screed in Episode 20. In other words, Sonichu goes back to serving as a Mary Sue proxy for Chris.

Return from the Void

Sure, whatever you say.

Chris explains that he returned from the Different Dimension on 08 August 2008[2] – but this doesn't make sense (SURPRISE!) since it would mean he has been back in CWCVille, as mayor, for at least a year. It was previously hinted that CWC would be returning for the end of "first season" (for Sonichu #9), and is still featured as Chris-Chan Sonichu in the preview for issue 10.

The question remains, "How does he escape the Time Void?".

In an anti-climatic move and almost as an after-thought, Chris pulls himself out of the Void with the help of Magi-Chan, and Wild Sonichu's vine whip power. During the epilogue, both Pokémon just happen to walk nearby the void, which appears right out of the blue, and they decide to rescue their "Master". Magi-Chan uses Wild Sonichu's whip as a safety cord and jumps in the Time Void's loose "Sphincter". After many unexplained adventures lasting less than a whole minute, Chris is finally released from the grip of the Time Void's bowels.[3] This page is followed by another claiming that, from now on, he will be able to tell more stories of (himself and) Sonichu and Rosechu.

As if this wasn't enough, Chris seems to have exited the Time Void, by himself, in 2015. Over there, he took part of a "Medical Study". We are sure that said research wasn't in the field of behavioral studies or psycho-pathologies, since Chris came back just as twisted as when he left. When he was on the future, he lied to his own future wife, the "Lovely and Hot" Lovely Weather (an unfortunate woman with an equally unfortunate name) by passing himself for his own Future-Self. Hidden behind this lie, he seduced her and had sexual intercourse with her. Unaware of the ethical issues related to lying to his own future wife for sex, he merely called it awesome.[4]

In short: Chris was stuck in the Time Void except for raping his future wife behind the back of his own future-self or punching an employee of 4-Cent_garbage for making a caricature of him.