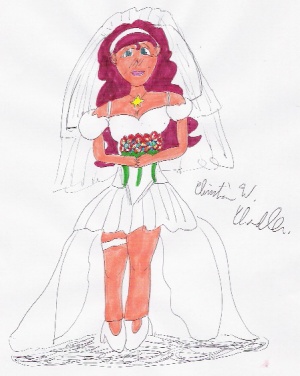 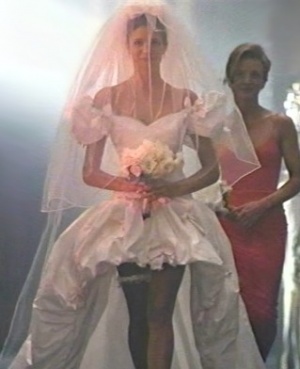 Sonichu Special 2, also known as the Wedding Comic, is a comic created by Chris in 2009. It shows how he visualizes his wedding to Ivy. The comic was released in its entirety on 12 May 2009 by Clyde Cash. Before that, it was featured in the videos MEOW and CWC's "It's All Coming Back To Me".

Art-wise, the comic is remarkable in that Chris included a bunch of flowery stickers in it. Ivy originally wanted glitter to be used in a scene where Punchy meets Layla (pages 23 and 24 of Episode 19), but Chris got stickers instead and they remained unused because external influences made him tone down the comic a little bit.[1] In these pages, the paper appears to be warped, perhaps because Chris couldn't be bothered to invest in decent-quality paper (rather, he seems to have gone to Wal-Mart and paid five dollars for 500 sheets).

Chris acknowledges that he uses a character recolor (Canino Houndhowl) "designed" by Megan. This is certainly not the first nor the last time Chris has attempted to use stuff from his previous relationships to produce awesomely romantic artwork; a similar thing could be seen in First Date Level.

It is Chris and Ivy's wedding day. Oddly, the sign outside advertises the "Chandler-Bundy wedding", even though Ivy's surname is O'Neil (Chris likely made an association between Ivy and actor Ed O'Neill, then confused Ed with his Married With Children character, Al Bundy.) Canino Houndhowl, a character created by Megan Schroeder[2], is on the door. The cake is prepared by some sort of dinosaur things called Gecko and Mantis (named after troll Gecko Mantis, who got his name from two Metal Gear Solid characters; similarly, the piano-playing cat Spas is also named after a troll). Punchy Sonichu is eyeing up Layla Flaaffy, while Sonichu and Wild comment on this, their respected women, Layla, Rosechu, and Simonla, simultaneously think "He looks so smart and handsome". Ivy's friend Rachel (previously mentioned in a video) is her maid of honor, her bridesmaid is Lilith and her father Officer Keino gives her away. Chris portrayed Ivy's father as Coach John McGuirk from Home Movies after Ivy mentioned he reminded her of the character.[3] Sarah Hammer. In front of Keno and Ivy is their flower girl, little Ching-Chong, with no explanation as to how either family knows there or how she even got there. In William Spicer's tuxedo, is Chris's best man (Even though Chris was not invited to Sarah's wedding in Sonichu 5. Since nobody can say anything bad about Chris ever, Sarah takes the time to say she's the joke as a woman in her husband's tuxedo (also never explained is that she and her husband wear the same size clothing). Crass and Champ are the ring-bearers. They are married by a preacher seemingly wearing headphones, and after the reception they leave in a carriage drawn by a My Little Pony -- desperately fleeing a maddened Rosechu, who pursues them down the road-she also appears to have caught the bouquet, even though she was already married and has 3 children. Not seen anywhere in this comic are Chris's mom and dad. Apparently their son doesn't see much of a need for them on his wedding day-in fact, no guests were drawn besides the wedding party.