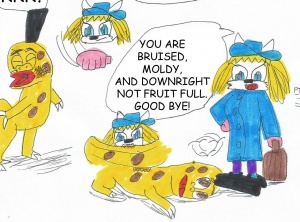 From Sonichu 11, a ween's character getting beaten up by a troll's character.

Bananasauros (sic) is a non-canonical species of Grass/Dragon-type Pokémon as a specific character who first appears in Episode 23 of Sonichu #11. As his name suggests, he is a yellow bipedal dinosaur around the same height as an Electric Hedgehog Pokémon with a body shaped like a banana, including a black "stem" on his head, and brown spots indicative of a very ripe and sweet banana. He has the distinct honor of being liked by no one, not even Chris, with the possible exception of his creator, William Elliott Waterman. Waterman seemingly created the character to help Chris write new Sonichu narratives that didn't involve himself or his personal enemies, but unsurprisingly, Chris lost interest very quickly.

Bananasauros is introduced when Simonchu and Sandy Rosechu bring in a fossil to the CWCville Museum, which is subsequently revived by an unnamed Rosechu scientist. He is initially in a smaller, non-banana-shaped, spotless form called Bananasaur, and becomes "Bananasauros" after evolving (a few pages later) when Punchy feeds him Pocky - a highly confusing naming convention given that "-saur" is simply an anglicized form of "-saurus". Punchy subsequently brings him home and introduces him to Layla. Other characters are initially incapable of understanding Bananasauros, but Punchy and Layla are soon shown to somehow read his thoughts.

Chris informs the reader through Bananasauros' internal monologue that he was in fact a high school "seinor" named David Rotgard, a self-described "expert rad gamer" who "loved the heavy metal and hard rock", a "B- average student" with an ex-girlfriend named Caitlyn, who he had recently cheated on with another girl named Henny. David recalls crashing his car while listening to AC/DC on the way to play video games with his friends, then waking up as Bananasaur at the museum.

At Punchy and Layla's house, he demonstrates his ability to play God of War. Punchy then takes him to a day care center and forces him to have sex with a Ditto in the form of a female Bananasauros to produce two Bananasaur eggs. Punchy and Bananasauros play Scrabble, and Punchy spends the rest of the day training Bananasauros to fight, upsetting Layla to the point of breaking up with him in the process. Punchy soon gets upset with Bananasauros' stereotypical teen male behavior. Punchy ultimately punishes him by hiring him out to Shin-nabe for menial tasks, to teach humility and respect.

Chris seems to dislike the Bananasauros character and promptly wrote him out of the main narrative in Sonichu 11. However, the character design (if not the actual character) made a cameo appearance in Sonichu 12, where a vendor named "Arcana Black" at the SLGBTQ pride festival sells Bananasaur plushes and "Banasarous" (sic) figures.

In July 2021, Chris confirmed that Bananasauros died sometime after the events of his debut comic, meaning the sweet release of death can provide someone with a way to break free the dystopian hellscape that is CWCville. Unfortunately, his species still survives, meaning that they will suffer in his place.[1]

Bananasauros first appeared (in Bananasaur form) in a piece of commission artwork Chris did in 2014, playing Scrabble with Punchy as he does in his official Sonichu debut. The character was made by William Elliott Waterman, who is the source of his bizarre backstory of being a high school student as well[2]. Further evidence of it being Waterman's character occurs in the comic, where Chris credits "VBB" (VikingBoyBilly, an alias used by Waterman[3]).

Bananasauros was featured in Sonichu #11 due to Waterman paying Chris $100 for the privilege[4][5].

Chris was apparently led by Waterman to believe that Bananasauros was a major draw to the comic, and mentioned his appearance while shilling his Patreon in CLog 06232017, despite the fact that no one but Waterman previously knew about the character. Chris wised up and quickly wrote off the character, while simultaneously criticizing Waterman, within the same Sonichu #11 plot it had appeared in.