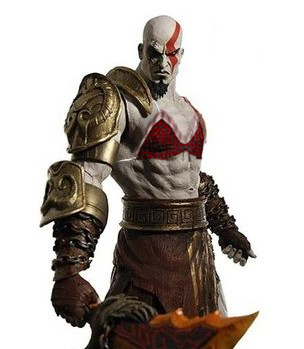 The hero of the series, Kratos. His ugly pecs are covered per Chris's standards of decency.

God of War is a popular Sony video game series. Chris is a huge fan, especially of God of War III for the PS3. It was one of his favorite games of 2010, along with ModNation Racers and LittleBiGPlanet.

God of War and Chris

In stark contrast to the casual and more kid-friendly titles Chris has been known to enjoy, the God of War series is known for its violence, gore, and mature storylines based on elements of Greek mythology.

There are two likely conclusions can be reached from Chris's enjoyment of the God of War series:

Chris discussed God of War on his Big Night Out.

Collosal Chan's final battle against Mary Lee Walsh in the comic was directly "inspired" by the God of War games (ditto the Collosal Chan character in general).[2] That battle was surprisingly non-violent, especially considering the gory murder-execution of the Asperpedia Four later in the same issue.

Chris signed on to vandalize the CWCki around the height of his interest in God of War, as his chosen account name was GodofThunderGodofWar.

Bananasauros asks to play God of War in Sonichu #11.