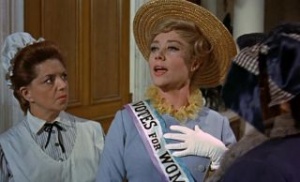 Mrs. Banks, wearing the "Votes for Women" sash that Chris so blatantly misinterpreted.

Mary Poppins is a 1964 Disney movie that is highly regarded as a classic of children's and musical cinema. It is less highly regarded as the favorite film of Christian Weston Chandler, who has made references to the film several times in his usual context-eschewing style.

His extreme zeal for "women's rights" probably comes from the character Mrs. Banks, the mother of Jane & Michael. As the story is set in England in the "spring of 1910" (although Emmeline Pankhurst's second arrest of 1909 was mentioned in an earlier song), women do not yet have the right to vote. She sang the second song of the film, "Sister Suffragette", and she made numerous references to the movement after that.

Mrs. Banks and her friends were depicted as struggling for the greater cause of being treated as an equal, with the same rights and treatment. But Chris, seeing Mrs. Banks speak fondly of all the shock value acts the protestors did (e.g. throwing rotten eggs at the prime minister), decided to take it to the only logical conclusion he could come up with: stripping and fucking. 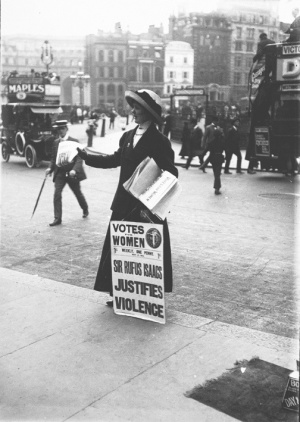 Sir Isaacs Justifies Violence? Who could have such horrible objections to a woman's right to Hanky-Panky?

Mary Poppins in the comic