Chris has created a number of profiles for dating websites over the years. Like everything else Chris does, these endeavors are usually made of pure fail.

Chris's Match.com profile is his oldest online personal ad, dating back to when he still attended Piedmont Virginia Community College, hung out at The Game Place, and wasn't quite so corpulent and maladjusted as he would eventually become. It appears to have been just as ineffective as all of the others, though.

OkCupid is one of the more popular dating websites, and matches people based on how they respond to questions that they may answer at their leisure. Unlike sites such as Match.com, OkCupid allows users to message and search each other for free, only charging for perks like ad removal and unlimited inbox space. The ability to stalk thousands of internet girls without paying a dime must have been a very attractive prospect for Chris.

Chris created his first OkCupid profile in late February 2009. He gave up on it very quickly — his final login was in early March, and he never answered any of the questions or quizzes that the site uses to build a personality profile of each user. It's likely he quit using it after girls failed to flood his inbox with offers of True and Honest love. In the usual Chris style, the profile is woefully incomplete, featuring only a very brief personal summary, and a looking-for box in which he checked every available option, including "casual sex."

A bit later, in April 2009, Chris created a second profile, which gradually evolved into something many, many times worse. 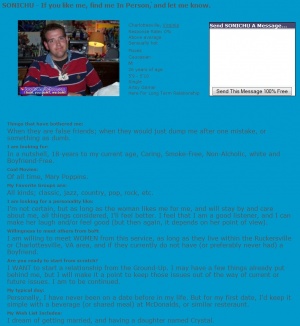 It's unclear when Chris made this profile, but given his stated age, it probably was made around late 2008 or early 2009, around the same time as his first The HooK Café ad. While the staples of half-assery are still present, it's clear Chris spent more time on this page then he did on his OKCupid profile. Many of the statements here are just repetitions of the Chris-chan facts we all know and love, though: his fantasy of a daughter named Crystal, McDonald's as a first date, and so on. True and Honest, perhaps, but hardly a way to impress babes. Chris also seems to believe that citing Mary Poppins as the greatest movie ever will somehow have a positive effect on the ladies.

If you like me, find me In Person, and let me know.

Things that have bothered me:
When they are false friends; when they would just dump me after one mistake, or something as dumb.
I am looking for:
In a nutshell, 18-years to my current age, Caring, Smoke-Free, Non-Alcholic, white and Boyfriend-Free.
Cool Movies:
Of all time, Mary Poppins.
My Favorite Groups are:
All kinds; classic, jazz, country, pop, rock, etc.
I am looking for a personality like:
I'm not certain, but as long as the woman likes me for me, and will stay by and care about me, all things considered, I'll feel better. I feel that I am a good listener, and I can make her laugh and/or feel good (but then again, it depends on her point of view).
Willingness to meet others from boM:
I am willing to meet WOMEN from this service, as long as they live within the Ruckersville or Charlottesville, VA area, and if they currently do not have (or preferably never had) a Boyfriend.
Are you ready to start from scratch?
I WANT to start a relationship from the Ground-Up. I may have a few things already put behind me, but I will make it a point to keep those issues out of the way of current or future issues. I am to be continued.
My typical day:
Personally, I have never been on a date before in my life. But for my first date, I'd keep it simple with a beverage (or shared meal) at
McDonalds, or similar resteraunt.
My Wish List Includes:
I dream of getting married, and having a daughter named Crystal.

Chris has put up at least two personal ads on the website of his local alternative weekly paper. One, dating to around the beginning of 2009, was hacked before its contents could be preserved for posterity. The second, however, found in April 2010, was successfully mirrored by the CWCki. A few days after it was initially discovered, the ad mysteriously disappeared (and was completely deleted from the site, unlike Chris's first ad, which he simply hid from public view after regaining access to it).

In August 2012, his private Facebook correspondence indicates that he attemped to reach out for sweethearts on eHarmony. He appealed to his gal-pals for guidance, but for some peculiar reason, nothing seemed to attract the ladies.

By 11 September, Chris was complaining, "NO woman will even reply to me on freaking eHarmony. Damn trolls giving me a horrible name and blame... And What the F***?! Am I ugly with no alibi or something? :("