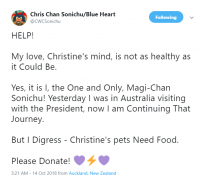 From October 2018-December 2018, Chris's CWCSonichu Twitter account was compromised by a troll posing as Magi-Chan who socially engineered him into giving his password. They would login and post tweets without his knowledge or consent. Some tweets which affirmed Chris's fantasies were kept up; others such as those leaking content from the Idea Guys would be swiftly deleted.

A tweet from 13 October 2018, which posted fanart depicting Mewtwo with sexual overtones, was location stamped as being from Sydney, Australia. The tweet was quickly deleted.[3]

The Captain speculated that a VPN was used by "Magi-Chan" to tweet from CWCSonichu due to strange location stamps on some tweets. He reported that he asked Chris about it, and that "he didn't seem concerned about the location tag."[4]

Another tweet from 14 October 2018 was stamped as being from Auckland, New Zealand.

On 14 October, Chris changed the CWCSonichu password and gave the new one to The Captain, who logged in to check IP addresses, to find that the "Places I've Been" feature got switched off.[5]

On 2 November 2018, two more tweets were posted to CWCSonichu. The first was an exaggerated beg for money for Chris's kittens Liza, Patches and Sylvia, who were ill - the tweet was tagged as being from New Zealand.[6] Shortly after, another tweet was posted, alleging that Snoopy had killed one of the kittens, with an image of a cat corpse.[7] A Kiwi Farms user claimed it was also tagged as being from New Zealand.[8] The tweets were quickly deleted. The image of the cat corpse was traced as originating from an article on special effects in horror movies.[9]

The Guard Dogs were involved in a tug-of-war over the account.