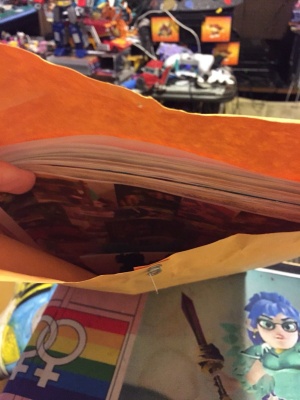 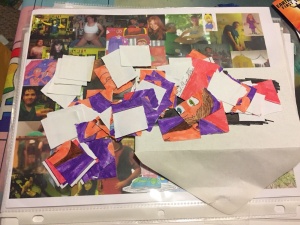 Some of the materials from inside the Crumple-Lope, including SheCameForCWC.jpg, carefully cut into squares

The Crumple-Lope is, well, a crumpled and yellowed manila envelope. Kept within the Scrapbook of Fail, inside the envelope resides the remains of the original ShecameforCWC.JPG[1], as well as several other "shamed past relationship art works."[2] Given the description, this could've likely meant the Sonichu Specials (Sonichu Special 1, Wedding Comic, Giant Penis Comic, Sonichu Special 4), the "UNGA-WUNGA" drawings, and many more, all of which were purportedly torn up for good measure.

The Crumple-Lope showed Chris's willingness to act out his anger on inanimate objects, but inability of throwing anything out (inherited from Barb).

As of November 19th 2015, the scrapbook had been revealed to have survived the fire, bringing joy to Sonichu fans everywhere, who had previously thought the artifact to have been destroyed.