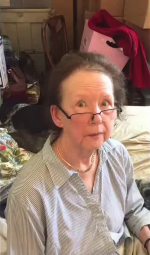 The $400 gold necklace is a relic of fail belonging to Barb. It was purchased on eBay for $400, after Barb was forced to sell her original gold necklace (that she had apparently paid $700 for in the 80's) for $325.

At the beginning of April 2017, Barb held a negative balance of over $800 on her bank account, due to Seterus, the mortgage servicing company for 14 Branchland Court, running out of patience on her delinquent account and charging her earlier, in addition to the amount she normally paid through autopay.[1]

Chris attempted to beg online for money, then, on 7 April, offered his Sonic Totem for sale on eBay for $1,500. It sold 4 hours later[2]. One hour after the sale concluded, Chris purchased the gold necklace on eBay for $399.99[3]. The listing described it as a "14K yellow gold Cleopatra bar 16" necklace." 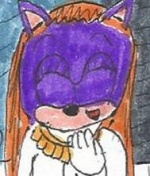 The necklace appears in Sonichu 11 in a panel from May 2017, worn by Christine Rosechu.

A week later, he explained in Live Game Stream - C-Log 04142017 that it was intended as a replacement for the necklace Barb was forced to pawn in November 2016, due to the Financhu Crisis[4] Of course, the irony of their financial incompetence factoring in both the buying and selling of expensive frivolities that are beyond their means was completely lost on Chris.

She could simply have sold the gold necklace instead. The fact that she prefers to beg highlights her extreme arrogance and hoarder mentality. It's no wonder why Chris is so terrible with saving money, with her as a parent.